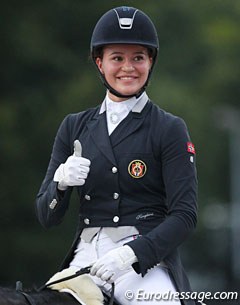 The 26-year old Tollefsen proposed to the 21-year old Andresen with a ring with an emerald flanked by two diamonds.

Alexandra and Joachim have been a couple for three years, but are life long friends. Alexandra's best girlfriend is sister to Joachim and both girls started riding together at the age of 3.

Tollefsen is a professional Mixed Martial Arts fighter with a background in Muay Thai. In 2014 he fought on the Norwegian MMA Team and won bronze at the inaugural  IMMAF World Championship. His last professional fight was in the autumn of 2016.

Andresen is the 2013 and 2014 European Junior Riders Championship silver medal winner. In 2016 she made the transition to Young Riders level and represented her home country at the 2016 and 2017 European YR Championships.