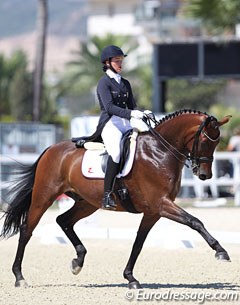 Norwegian young rider Alexandra Andresen has sustained a complicated fracture to her wrist, falling off a horse on Friday 13 January 2017. She will be out for eight weeks with her arm in a cast.

Andresen was hacking her 2016 European Young Riders Championship ride Borencio with a friend, when a truck approached on a small local road and refused to slow down, despite signalling from the riders.

"Borencio threw himself out in a field and got the fence between his legs. Running and bucking in full panic," Alexandra told Eurodressage. "I landed on my right wrist. It's fractured both vertically and horizontally and I have some loose pieces in there. The surgeon had to pull my wrist straight to avoid an operation."

Andresen, who is based at the Tanum equestrian centre in Norway, will not be able to ride for at least 8 weeks.

Borencio (by Florencio) did not sustain a scratch. The truck driver did not have the courtesy to stop and his identity is unknown.