Candy, Champion of the 2016 Oldenburg Elite Mare Show in Rastede 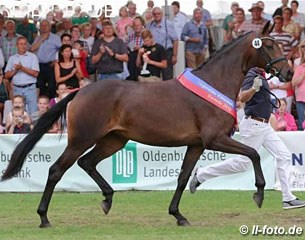 Candy (by Sir Donnerhall I x Fürst Heinrich x Rubinstein I) was named champion of the 2016 Oldeburg Elite Mare Show held annually in the castle park in Rastede, Germany.

Candy descendds from the ever successful Cinderella family of renowned breeder Paul Wendeln and his wife Hilde. The Champion Mare is a sister of Sir Heinrich OLD, a licensed stallion and Bundeschampion of six-year old dressage horses under Anja Wilmzig, and of the 2013 Bundeschampion of four-year old riding horses, Cindy OLD, who was also the 2012 Reserve Champion Mare in Rastede’s Brillantring. Candy also achieved an outstanding total score of 8.63 at her broodmare performance test.

Magic Moon S (by Desperado x Sandro Hit x Donnerhall), bred and owned by Georg Sieverding from Emstek, became the reserve champion. Granddam Maradita produced two sons that were licensed, sold at Vechta auctions and went on to win ribbons in 4th level dressage: Silver Black OLD, who sold to Marta Peña from Spain, and Sieger Hit (by Sandro Hit), who sold to Denmark. The mare line of this highly refined mare is also the origin of the successful sire, Fürstenball by Fürst Heinrich.

The third placed mare in the Brilliant ring, the champion ring in which the best of the best compete for the title, was Feel Free (by Foundation x Sandro Hit x Donnerhall), bred by Indira Wallner from Schwinkendorf and owned by Bernadette Brune, who lives in Monaco but has a brood farm in Germany. The strong moving mare was discovered at the Oldenburg Horse Center Vechta during the 2013 Elite Foal Auction. 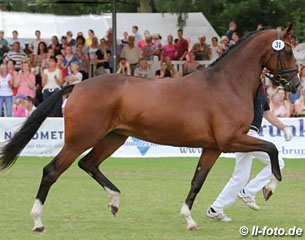 Lafayette (by Lordanos x Landadel x Weltmeister) became the jumper champion mare. Blessed with awesome jumping ability, the mare bred by Franz Albers from Höltinghausen and owned jointly by Sanktjohanser & Lauderbach from Löningen was awarded 9.0 in free jumping at her broodmare performance test. Her dam Leandra, who won ribbons in 1.30 meter show jumping tests under Bernd Osterkamp, also produced a daughter named Lizabella by Lordanos who sold at the Vechta Auction and is now successful in tests for youngsters under Anna-Elisa Tofall. Lafayette’s granddam is the sister of a licensed stallion named Westminster by Weltmeister who sired Franke Sloothaak’s World Champion, Weihaiwej.

A number of the premium mares competing in the prestigious Brillantring began their careers as a foal at the Vechta auctions. So don’t miss the opportunity to find your future hero at the upcoming Elite Foal Auction on August 27th at the Oldenburg Horse Center.