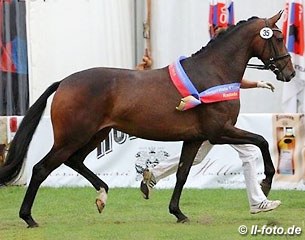 Funf Sterne became the champion mare at the 2014 Oldenburg Elite Mare Show in Rastede, Germany, on 24 July 2014, but the event was actually a major triumph for the 8-year old sire Furstenball, who had 13 daughters selected for the show and no less than 5 for the brilliant ring, including the champion and reserve champion.

The 3-year old mare Funf Sterne (by Furstenball out of Remember (by Rubin Royal x Donnerschlag)) is bred by Carsten Middendorf and owned by Rolf Moormann. She was the high scorer at the mare performance testing with a total of 8.67 and received a 10 for trot. She was named champion of the Elite Mare show and will be offered for sale at the 2014 Oldenburg Autumn Elite Auction in Vechta.

The reserve champion was the 3-year old Amelie (by Furstenball out of Auguste Victoria (by Sandro Hit x Plaisir d'Amour). Bred and owned by Britta Budeus-Wiegert, Amelie moved very well in Rastede. Her dam is the full sister to licensed stallions San Amour I and II.

The bronze medal went to 3-year old Calla (by Rock Forever out of C'Est Bon (by Furst Heinrich x Rubinstein), bred by Paul Wendeln. Calla is a full sister to the Bundeschampion Cindy and a half sister to the licensed stallion Sir Heinrich.