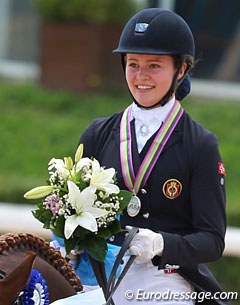 Norwegian Young Rider Alexandra Gamlemshaug Andresen has begun an internship as a bereiter at Johann Hinnemann's yard Krösterhof in Voerde, Germany. Andresen has now made the defined choice of going for a professional riding career.

Andresen has taken two horses with her to Germany, the 10-year old Oldenburg stallion Don Massimo (by Don Larino x Santander x Rubinstein) and the 6-year old Dutch warmblood Empire B (by Sting x OO Seven). Her former FEI pony Not for Sale also came along to be sold.

"I've always wanted to become a bereiter," Andresen told Eurodressage. "So I have been planning this for a long time. This is what I want to do the rest of my life, ride!"

In 2015 Andresen was remarkably absent from the international competition scene as her top horse Belamour has needed all year to recover from a severe injury. He only recently started training again.

"Don Massimo has also been injured this season," Andresen explained. "And I wanted some more time with Empire so we decided not to rush things. This year has been really tough, but hopefully I will stand on the podium again next year."