Angelika Frömming: "To Win or Not To Win, That is the Question" 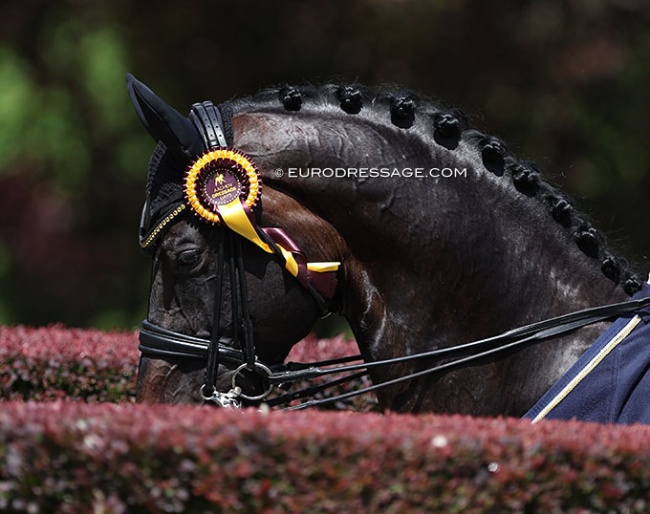 Sometimes things do not work out the way you want and with increasing age the infamous stress of retired people comes on top. Initially I had planned to absolutely watch the Grand Prix and Grand Prix Special at the CDI Aachen Dressage (13 June 202) at the wonderful property of the Kasselmann family in Hagen live, but family matters like the visit of Starlight Express in Bochum and extensive travel preparations made a visit in Hagen impossible.

So thank goodness there is ClipMyHorse and an additionally bought powerbox which helps to overcome internet trouble in Füchtorf in the north of the Münsterland.

My particular interest belonged to Jovian, the former World champion of the 7-year-old dressage horses which I could admire last year in Verden and whose scoring put exclamation marks then. In the warm-up class as well as in the final Jovian was awarded the 10 for his trot,  his ability to collect and take weight as well as his perspective as a dressage horse. He won convincingly with a huge leeway in his age division.

The past weeks the press was full of news about the successful Grand Prix newcomer.

Of course I am aware that a video observation is something totally different from a live experience, but the big line of shown gaits and the presentation of single movements are pretty well obvious also on live streaming. My curiosity was if the stallion with the elastic and ground covering movements had managed the big step to Grand Prix with its requirements of highest collection within this single year.

Since the 1980s the general quality of movements has a higher value when judging a performance than in the past. This isn’t always pretty easy. The moment technical mistakes occur one has to put them in relation to the basic quality of the movement. The decisive question when doing so is on the one hand if a movement still can be judged as "sufficient" (5) because the global judgment of the movement can be "rescued" by the quality of the gait. On the other hand it is decisive when a movement, despite a general positive quality of the gait, has to be marked with an "insufficient" (4) because it has too may defects.

Furthermore this a Grand Prix test is not a "dressage horse class" for Grand Prix horses. This means the "potential" and "perspective" should not play a role anymore. Only what happens in the arena should be considered, nothing else.

So back to Jovian. He is an imposing horse. His trot half-passes, to speak with the words of the late Paul Stecken, are „most valuable“, even though he fell into canter on the right lead- shit happens! The trot work showed very good activity of the hindquarters and very much “modern” shoulder freedom. Occasionally the difference between collected trot, passagey trot and passage could not be clearly seen.

In the moments of collected canter one could now and then ask oneself if the diagonal really stepped down synchronically. This is a phenomena which can happen with young horses that have not yet developed enough carrying power to come back in canter and this kind of coming back gets exaggerated. Of course this way of canter stride is allowed in the canter pirouette, as long as a clear canter stride can still be detected, but note that it is is entirely only valid for canter pirouettes. These things I mentioned are a question of further gymnastics and refinement of the tempo.

Two moments in Hagen might give the impression that the very engaged Jovian is possibly not yet practiced enough regarding balance and the highest degree of collection:

1) His piaffes and transitions do not comply with the requirements of the international dressage rule-book. Overall in the first piaffe of the Grand Prix Jovian left the impression of an over motivated drummer who leans over his percussion section and additionally stand up from his chair…

In these two central movements Jovian appeared over motivated and insecure.

Although I did not watch the whole class, I pose myself the question if a horse that shows such significant weaknesses in such key movements can win a Grand Prix class?

This is a general question that comes to my mind here. Experience taught me these moments usually start new discussions  every 20 years. The results are usually the reintroduction, the elevation or the deletion of certain coefficients, or the change in the collective marks.

Based on the scoring we saw at the Aachen Dressage Days, a new discussion of the rating system could be possible. However, is it useful to be a winner that way if a winner is supposed to be a role model of his sport?