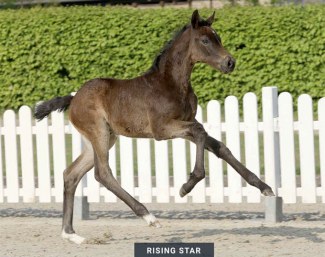 The Westfalian society has achieved a new record price for a foal in the 2021 Westfalian Online Foal Auction which concluded on 31 May 2021.

This foal sold to private customers who live right near Adrian Gasser's Gut Schönweide, the owner of sire Raven.

The record auction price for a foal is to date 200,000 euro. Two foals sold for this price: A La Dressage and Total Recall.

The first one to sell for 200,000 euro was A La Dressage (by Ampere x Sandro Hit x Donnerhall), who sold to Switzerland at the 2011 Oldenburg Elite Foal Auction in Vechta, Germany. The horse never returned to public, not as a licensed stallion, nor in sport. At the time he broke the previous record held by Sabeltanz, which sold for 127,000 euro.

The second 200,000 euro foal was Total Recall (by Totilas x Sandro Hit x Figaro) which sold to Paul Schockemohle and Ann Kathrin Linsenhoff. This was a typical strategy of stallion owners to boost the value of their offspring, but purchasing a foal by their own stallion for an excessive amount of money. Total Recall was from the first crop of foals after Schockemöhle had purchased Totilas in the autumn of 2010.

The second most expensive foal at auction is Be my Beauty Queen, which sold for 160,000 euro to Danish breeder Lone Boegh Henriksen at the 2017 Hanoverian Elite Foal Auction.

The most expensive filly was Taurina MB (by Taurus x Dimaggio), bred by Michael Bügener. She sold for 16,000 euro and remains in Germany.

Not all foals in the collection sold. 85 percent found a new owner and because of that top priced foal, the average price was boosted to 11,393 euro.

The best selling pony foal was Dolittle (by Der Graf AT x Nabucco R), who moves to the USA for 6,250 euro.