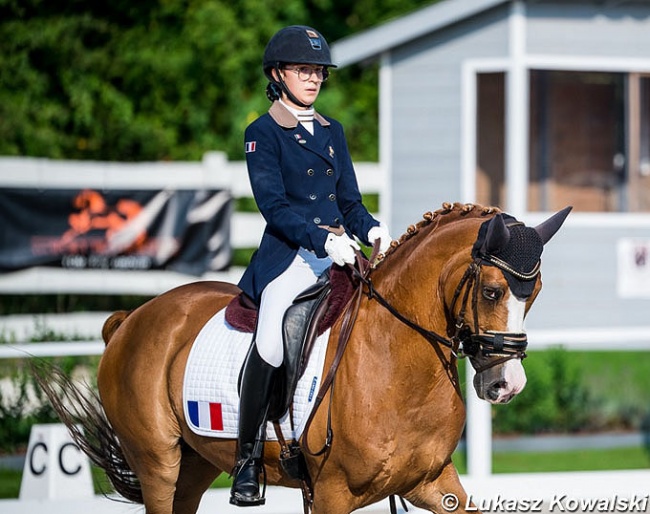 The French European Children Championship team pony Kind of Magic Fast has been retired from competition sport. He is 15 years old.

Kind of Magic Fast is a Rhinelander registered pony by FS Champion de Luxe out of SR Magic Moments (by Marsvogel). He is bred by Simone Rossberg-Visser.

Bred in Germany, Kind of Magic sold to the Rouxel family in France of stud farm "Fast" and was licensed as a young stallion.

Under Cassandra Rouxel the pony made its international show debut in the Children division at the CDI Pompadour in June 2017.

Already in 2017 Kind of Magic had sold to Bruno Thomas for his daughter Eloise to ride.

Kind of Magic Fast no longer competed internationally after the 2020 European Championships but continued at national level for two more years.

Thomas rode this XXL-sized pony at junior level in France for the past two years. They had planned on riding in Le Mans in October 2022 but withdrew.  The pony has now been officially retired from sport.

"Unfortunately at the end of 2021 Kind got injured and we didn’t find the cause right away," Eloise told Eurodressage. "We have just found the cause and after several years in international and many years of competitions I have decided to retire him at home. He will not leave (our) home!"

Thomas will continue at junior level with new acquisition, the 14-year old Hanoverian mare Fliederfee (by Fidertanz x Lafayette), who was previously competed by Jorge Barbenza.

"I have a lot of hope on this mare that I found in Germany in a Grand Prix stable," Thomas told Eurodressage.