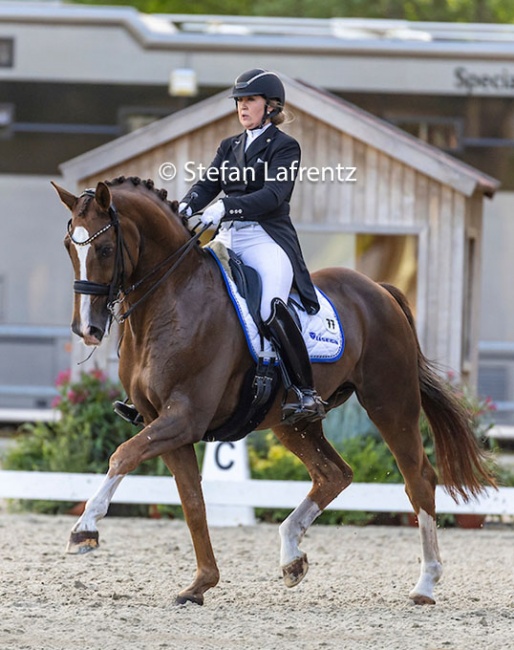 The nationally competed German Grand Prix horse Freudenschaft has been sold as a schoolmaster to aspiring German Under 25 rider Henriette Schmidt.

Freundschaft is a 13-year old Oldenburg stallion by Florencio out of Love Story V (by Donnerhall x Akzent II x Freiherr). He is bred by Josef Wernke.

The liver chestnut Freundschaft was licensed as a 3-year old at the Oldenburg late approval in Vechta, Germany, in March 2012 but never did his stallion performance test.

Instead he was focused on sport. He was first competed in 2012 by Pieter van der Raadt and got the bronze medal at the 2012 Oldenburg Young Horse Championships in Rastede. They went to the 2012 Bundeschampionate in Warendorf, where they were 11th in the first round for 3-year old riding horse stallions.

Van der Raadt competed him through 2013 and then the stallion disappeared from the show scene.

In 2016 he returned to the competition arena at M-level under Anna Casper, who placed 17th at the Preis der Besten qualifier in Kronberg. A month later Oliver Luze was onboard. By 2018 the horse was competing at Grand Prix level.

Freundschaft again took a break from showing but returned in 2020 under Janina Siemers. She campaigned him at regional Grand Prix level shows in the Hamburg area through July 2022.

Freundschaft has now been sold to Sönke and Judith Schmidt, parents of former German Young Riders' team member Henriette Schmidt. She will turn 22 in 2023 and is out of the Young Riders division. With Freundschaft she could move up to Under 25 Grand Prix level.

Schmidt made her international show debut in 2017 on pony Mister Dornik (by Dornik B x Aratoss) but the same year she was also competing at international junior level with Rocky's Sunshine (by Rock Forever x Fittipaldi). In 2018 she moved definitively to junior level and added Don de Jeu (by Jazz x Jetset D) to her string.

Henriette's big break came in 2019 when she represented Germany at the European Junior Riders Championships in San Giovanni in Marignano, here she got team gold and placed 20th in the individual test. In 2020 she moved to Young Riders' level and was re-selected on the German team for the 2020 European Young Riders Championships in Budapest, where she got team silver and finished fourth in the individual test.

Schmidt rode at only one CDI in 2021 (Hagen) on Rocky's Sunshine and two in 2021 aboard Don de Jeu. She made her show debut on Freundschaft at the local show Tremsdorf in Nuthetal on 12-13 November 2022 finishing 6th in an S* level test with 69.342%. In the S** test the next day they were 13th with 66.404%. Schmidt also competed her parents' home bred 10-year old Hanoverian stallion Royal Rubiniro (by Rubin Royal x De Niro) in this class.