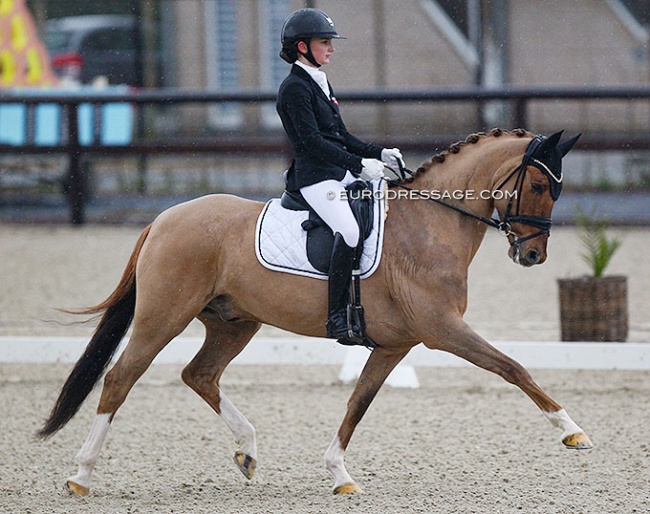 Her team pony Kastanienhof Crimson Gold sold to Germany at the end of August, and now her second international FEI pony, Strandgaards Doleys, has found a new home in Denmark.

The red dun Doleys is bred by Marie Louise Ebdrup at Stutteri Følle Strandgaard in Denmark and registered with the Schleswig-Holstein studbook in Germany.  He is by Dr. Doolittle out of Maxine (by Dance of Joy x Golden Dancer x Vagabund).

The pony made its show debut in Denmark as a 7-year old in 2018. He was first competed by Nora Kemper but halfway through the season Caroline S Jørgensen took over the ride. She also competed his sire Dr. Doolittle.

In 2019 the pony sold to Olaf Ehrenskjöld and became the ride for Sarah-Christine Ehrenskjöld's turn, who consistently competed the pony at national level in Denmark until August 2021.

In September 2021 Doleys sold the Nielsen family for Josephine to add to her string of ponies, which included her 2020 European Championshipt team pony Dot Com and Timms My Fritz at the time. The new duo its her national show debut in September 2021 and their international debut was in November 2021 at the CDI Aachen Indoor. In 2022 they competed at CDI's in Lier, Opglabbeek, Troisdorf, Aalborg and Hagen, but Nielsen got selected on the Danish team with her other FEI pony, Crimson Gold.

Doleys has found a new owner and rider in Danish pony rider Laura Amalie Odgaard. He switched into her hands on 27 September 2022.

Odgaard trains at Stald Hussmann in Vejle, Denmark, and has been competing ponies Bruno Mars-G and Zorro Z