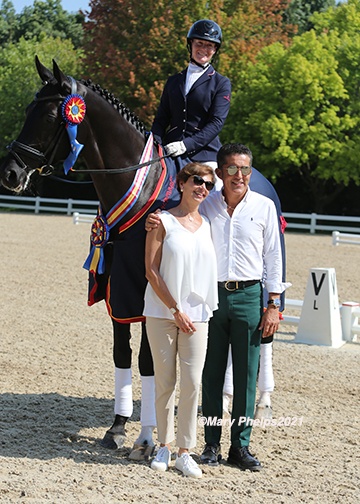 Dr. Cesar Parra will be show casing four horses in four divisions  at this week's 2022 U.S.  Young and Developing Horse Championships at the U.S. Festival of Champions in Wayne, on 24 - 28 August 2022.

The 2022 U.S. Young and Developing Horse Championship is the United States most prestigious event featuring the year’s top ranked combinations in each category and draws the best of the best from all over the country. The event returns to Lamplight Equestrian Center in Wayne, Illinois, and starts 24 August, running for four days through 28 August.

Dr. Cesar Parra’s Performance Farm team received invites for four of his horses in all four of the young horse divisions.

“When you realize that only the top 15 horses in the US in each age group are invited to the Championships, it is especially humbling to have 4 horses in four different age groups invited,” Parra exclaimed.

Building on Past Achievements

For Dr. Cesar Parra and his Performance Farms team, the annual trek to the U.S. Young and Developing Horse Championships has become a highlight in Performance Farm’s summer schedule. Over the last two decades, Parra’s program has become synonymous with High Performance and the development of top-quality young horses and riders. Since Parra’s win in the U.S. Intermediaire I Championship in 2010 aboard Olympia, Parra and his team have found success in virtually every division at Festival of Champions, but undeniably the Markel/USEF Young and Developing Horse Championships is where they have made the most prominent name for themselves as a force to be reconned with.

“We have been very blessed throughout the years to have wonderful horses and riders in our team. I am not sure what the exact number is now, but with the four horses we have qualified for this year’s Championships, we have been invited with over 30 combinations over the years!” said an ecstatic Parra as he adds that “not only have we been invited but most of our young horses have placed in the podium of their respective categories and many of them have been National Champions or Reserve Champions.”

Parra credits his success in bringing horses up the levels to team work and a program that emphasizes solid basics to create a strong, healthy athletic horse. “We believe the formula for success is to build a happy, healthy athlete.   Regardless of how long it takes, it is important to give each horse the time to develop body and mind so that they can become the best version of themselves.

“The Young and Developing Horse Championships are a steppingstone in the development of these the amazing horses,” says Parra, “and have been pivotal to dressage sport in the US.  Up until ten to fifteen years ago I was mostly trained in Europe. I owe my program to great masters like Herbert Rehbein, Dr. Volker Moritz, Mariette Withages and Hubertus Schmidt. However, in large part thanks to the great support and collaboration between US Equestrian and Markel Insurance, in recent years we have had excellent support and training here in the US from very accomplished coaches like Anne Gribbons, Christine Traurig and Charlotte Bredahl!”

For Professionals and Amateurs

Not only does the Performance Farms team focuses on the development of horses but also of riders.

“To have well trained, happy horses, we need the best riders and horse-people. Therefore, in our team, we pride ourselves on learning from each other and being students of the sport. Not only our professional riders, but also our amateurs strive to become better horse-people daily.”

As the Performance Farm Team settles in at the Lamplight Equestrian Center with the their "Fantastic Four”, they are confident that things on the home front farms in New Jersey and Florida will run smoothly and they are equally excited about the upcoming competition and the camaraderie they will share with fellow equestrians from around the country.