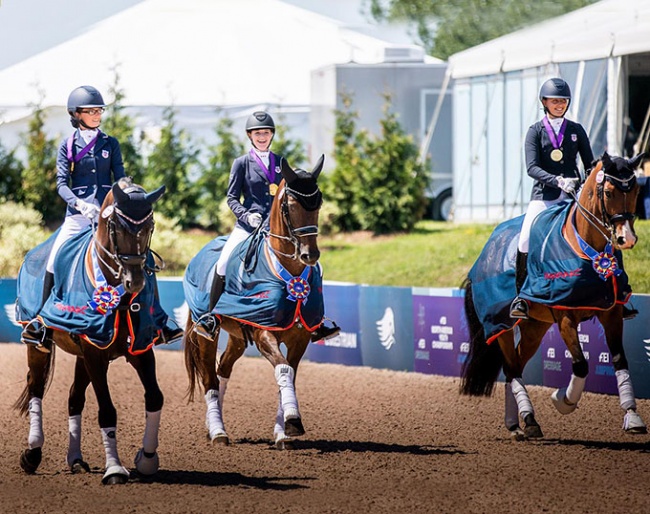 History repeated itself on the first day of competition at the 2022 North American Youth Championships (NAYC) for dressage as the Junior team representing Region 4 won team gold for the second consecutive year.

Not only was it a repeat win for the region, but the roster was made up of veteran horse-and-athlete combinations from the 2021 Region 4 Junior Team. Lexie Kment (Palmyra, Neb.) and Montagny von der Heide, Ella Fruchterman (Woodbury, Minn.) and Holts Le’mans, and Kylee Kment (Palmyra, Neb.) and Honor have now all earned the distinction of being two-time NAYC team gold medalists.

“In the warmup it was all coming together. He was really going into my hand coming from the hind leg,” said Kylee. “And then going into the test, there’s usually a little bit of a switch, like I start riding differently knowing that this is the show ring, but this time it felt very cohesive, which was nice. And so going through the test, the trot work, that cohesiveness felt the same, like he was really in front of my leg. And the walk work, canter work, he was just really good. He was really listening. It was so fun.”

Fruchterman rode her 11-year-old Danish Warmblood gelding to her two team gold medals, earning a 69.303 in this year’s team test. She reflected on how the experience was different this year as the team reunited in Traverse City.

“Coming into last year, we had not known each other until we got off the trailer and were all together for the first time,” said Fruchterman. “This year we ran into each other in Florida, and we got to hang out and we’ve been talking over the phone the whole year, so I think we’ve really come together as a team and built great friendships. It’s so special being up here with them.”

Lexie and “Monte,” Laureen Van Norman’s 18-year-old gelding, also won individual gold at last year’s NAYC, and posted a 67.121 in today’s test. A challenging year put the competition in perspective for her.

“At the end of last year, I felt the pressure of, ‘Okay, you might have had a great season; now we have to go back and do it all over again,” said Lexie. “But this February, my horse suffered an injury and so coming back from that, the first thought was, we’re never going to get back to that spot again.”

But Monte recovered well, and the goal of returning to NAYC came back into focus.

“Just coming into today, [my mindset was], yes, I want to be here for the team and I want to do well but I just want to get through the test and have it go well and have him be sound. So just getting that goal was really, really great.”

The Canadian team of Olivia Tomljenovic and Valkira, Kiara Williams-Brown and Herdeiro Santana, Alison Campbell-Wright and Slapstick, and Anna Swackhammer and Fabienna GV earned the team silver medal with four solid tests. Swackhammer had the team’s best score of the day with the 9-year-old Westphalian mare, earning a 69.242.

“This is my fourth time at NAYC, but my first time with a new horse, so it’s exciting,” said Swackhammer. “She definitely woke up once we got into the ring, but once she really relaxed, she was really smooth and everything was really cohesive, and I was really happy with that overall.”

Chisholm summed up her feelings about her first NAYC experience, noting the camaraderie between athletes that spans across the teams.

“I tried to go last year and didn’t make the team, so this year I was definitely making that big push,” said Chisholm. “[My horse] did really well, and it’s just awesome to be here to compete and meet a bunch of young riders and juniors who are all doing the same thing. We all have the same goal. It’s been amazing.”