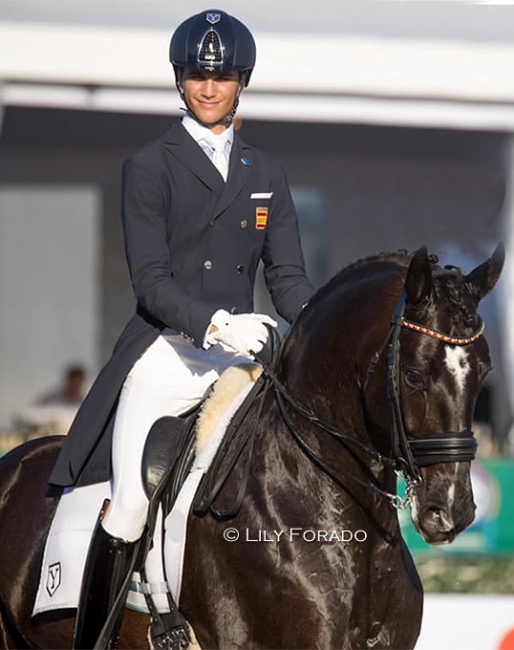 Copernico is a 12-year old Oldenburg gelding by San Amour out of Gestiane (by Don Gregory).

Copernico is bred by Oliver Kotschofsky and was originally named Santiago.

He sold at the 2015 Oldenburg Spring elite auction to Juan Matute Azpitarte, who purchased him for 27,000 euro.  His auction name was "Schoschofky."

The dark bay made its international show debut as a 6-year old under Juan Matute Guimon at the CDI Wellington in March 2016. In 2017 Juan and Copernico represented Spain at the 2017 World Championships for Young Dressage Horses and placed 19th in the consolation finals for 7-year olds.

In 2018 the horse competed a season at Young Riders level in Wellington, as well as CDi's in Segovia and  Ponte de Lima. They capped off the season winning the 2018 Spanish Developing Prix St Georges Horse Championship.  In 2019 Juan and Copernico competed briefly at medium tour level with a CDI start in Segovia.

When Juan Matute was hospitalized with a brain bleed in May 2020, Copernico was sent to Benjamin Werndl to be sold.

German B-squad rider Lisa Müller purchased him and he was re-entered under his name FN name Santiago 265. Lisa showed him briefly in the national Intermediaire II in the autumn of 2020.

In the spring of 2021, the horse was presented by German young rider Luca Collin as well as her coach Jochen Bender, but in June 2021 Lisa was back on board, riding him first at small tour level and then back up to Inter II.

In June 2022 the horse was competed by Isabelle Bottermann, who first rode for Johann Hinnemann and now rides for Isabell Werth.

The 28-year old owns a dressage stable in Wroclaw and runs a cosmetics company. Her first Grand prix horse was Capo and she has also competed Showstar, Ritmo Royal, Flash Fire and Babalou AS at FEI level.

"I wish to start my international career with my new horse Copernico," said Poplawska, who trains with Pawel Dabrowski. "My mom and I want to develop dressage in Poland, that’s why we buy experienced horses and we cooperate with high class trainers."