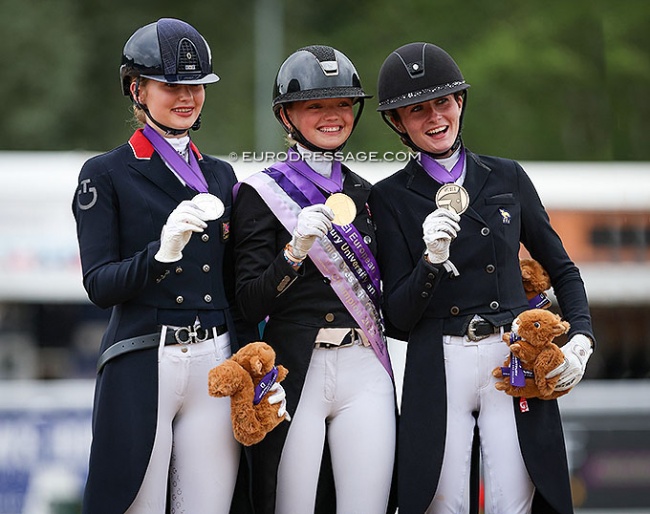 The 2022 European Junior and Young Riders Championships came to a conclusion in Hartpury (GBR) on Saturday afternoon 30 July 2022 with the Kur to Music finale for junior riders. Denmark's Sophia Obel Jorgensen surprisingly stormed to the top and collected the kur gold medal while home favourite Annabelle Pidgley got silver. The sensation of the afternoon was Mathilde Juglaret mounting the bronze step of the podium, a historic achievement for France.

Saturday's action packed day at Hartpury equine college began with the Young Riders freestyle final in the morning and atypically the lower level junior Kur in the afternoon. Level-wise this was not truly working towards a climax. In the background the cross country phase for the European junior and young Riders eventing championships took place and brought afoot a larger crowd that also came to watch dressage.

The overcast sky had been the dominant weather type the entire week, but temperatures were perfect for horse sport (21 C°) and only during the junior finale the weather changed with some rain drizzling down. It did not spoil the fun as the rain fell just for a short moment and the medal ceremony took place in good conditions.

The Junior Freestyle finale was judged by Kirsten Soegaard (DEN), Lars Andersson (SWE), Isobel Wessels (GBR), Elke Ebert (GER), and Jean-Michel Roudier (FRA) and the sorting of the riders in this Kur to Music class proved to be a challenge.

Many pairs did not show the finesse of previous days and made mistakes. some riders had good music, others failed to impressive with their muzak. It needs to be noted that in general youth riders are more gutsy with their choice in music, probably because of their interest in the latest pop songs, and they do bring a beat to the barn. However, for the spectators as well as for the judges it seemed a guessing game who were the best pairs of the day.

Also I find it hard to really pick a winner of podium place getters: some had better music, some had better training, some had too many mistakes.. what weighed more heavily.. I posted the same question in the Young Riders freestyle final.

Denmark's Sophia Obel Jorgensen landed at the top of the board with her 10-year old Oldenburg gelding Brilliant (by Bretton Woods x Diamond Hit) on a score of 77.695%.

The young Dane, who had an illustrious medal winning career on her pony Adriano B, proved her skill on horses at this year's Europeans. She not only won team and individual test silver the previous days, but her riding and horse were clearly liked by the panel and they rewarded the elegant duo with Kur gold.

Obel rode to Zoe Wees' I Don't Want to Loose Control and Rihanna's Diamonds. She began with trot work that featured lots of variation in the lateral movements. In my opinion the half pass and shoulder in right were not even in the rhythm with the horse's head clearly nodding in the pole. The trot extensions were regular with good ground cover and impulsion. The walk was the best Brilliant had shown this week, as his extended is minimal in ground cover. In the freestyle, however, the horse walked at his best with 1 hoof overtrack. The collected walk was a bit tense but the right walk pirouette was well ridden. In canter the duo showed confident tempi changes, but at times the liver chestnut was rushed and dropped in the poll. The final halt was wide behind.

As third last rider to go, Obel scored 77.695% to place first and this score was not bested by the two riders that followed. Only two judges had the pair first, one judge placed her second, one fourth and one sixth. The high score was 80.025% (Wessels), while the low score was 75.250% (Andersson). which ranked them sixth. Obel trains with Danish team trainer Dennis Fisker.

British Annabella Pidgley had much to live up to in Hartpury after having won two individual silver medals with Sultan des Paluds at the 2021 European JR Championships in Oliva Nova last year. Opting to ride her younger horse in Hartpury, the 8-year old Westfalian mare Espe (by Escolar x Dimaggio), Pidgley had much to live up to as flagship rider of British youth sport.

It is one thing for affluent parents to buy a Ferrari (horse) for their children to ride, but it's another for these kids to actually steer and control such horse power. It is not an easy feat, often underestimated by many. Pidgley does an outstanding job in presenting an interesting picture with plenty of promise for the future. It probably does help that riders such as double Olympic champion Charlotte Dujardin and Danish Olympian Cathrine Dufour are coaching her from the sideline.

Dujardin was on the scene to help Pidgley control Espe's gear box. The bay mare has a tremendous engine and at the moment everything that is ridden forward is very impressive, but the collected movements are still a challenge for the horse and rider combination. In the individual test they won bronze but Espe clearly got behind the aids in canter. In the freestyle they were not able to stay fault-free with the flying changes being the bigger issue (often croup high or in two phases) but the judges scored them between 6.5 and 7.5 nonetheless. The mare's collected walk is also a big issue as she becomes peacocky in them with too much ground cover and stiffness in the back (6.5 - 7). Riding to music by Taylor Swift, Annabella did have several major highlights in her test with the trot half passes being outstanding and also the extended walk showing massive overtrack and clear 4-beat striding. The contact with the bridle is still inconsistent. Annabella tried hard to keep her in a light open frame, but the mare's mouth often gaped or showed tongue on the right side.

It was a nail biter for Pidgley and her team waiting for the scores to flash on the board but the 77.600% was just a hair less than the winner and silver was theirs. The individual judges ranked her between first and fourth with 75.375% as low score (Roudier) and 79.650% (Wessels) as high score. Freestyle silver was another great day for British Dressage on home turf and rounded off a week of tremendous progress for British youth sport.

France's Mathilde Juglaret came to Hartpury as the outsider with medal scoring potential. Her break through moment was in June when she won the Kur to Music at the CDIO Hagen, ahead of the "established" youth riders, and suddenly this "moment decisive" opened doors for a medal in Hartpury.

Juglaret should have been on the podium in the team test, but ended up fourth and her day of redemption came on Saturday in the freestyle. Riding to church music with cathedral bells tolling, Mathilde and the 10-year old Lusitano Caporal de Massa (by Rieto x Xaqiero) brought a lot of drama to the ring as the music matched the footfall of her horse. At times she even hurried the grey stallion a bit too much (half pass right), but the trot extensions were big. In the collected walk the stallion got tense and quick, but the extended canter was a highlight with its ground cover and uphill tendency. There was also a bobble in the flying changes (5 - 7.5).

The judges rewarded the test with 77.225% which was good for bronze. This was much to excitement of an overjoyed Team Juglaret that jubilated, cried and hugged without limit as Mathilde was the last to go in a field of 18 starters.  Juglaret is the daughter of French international Grand Prix rider Anne-Sophie Serre and has grown up around horses.  The judges had the pair from first to fifth place. Two judges saw them as the winner, one as fourth and two had them fifth. The high score was 78.025% (Andersson), the low score was 76.00 (Ebert).

Not According to Script

A student of Sonja Ellerbrock, Allegra had her hands full piloting the 10-year old Hanoverian stallion (by Londontime x San Remo) through her programme. The black and his rider were not always in unison, which led to a break into canter in the volte and the half pass right lacked smoothness. The first extended trot was conservative and slow behind, the second was very well ridden with good ground cover. In canter Allegra could not keep the lid on the cooker and Libertad started to throw in several unscripted flying changes, even though the right extended canter was the highlight of the test.

The pair posted 76.520% which landed them fourth place. One judge had them second (77.275%), one seventh (74.750%). Even though no third medal was won, Allegra has an exceptional European Championships to look back on.

Miesner and Bogers in Pursuit

Another front-runner in the freestyle was German Carolina Miesner aboard the 11-year old Hanoverian gelding Exclusiv (by Edward x Wolkenstein II). The duo rode to fun music based on Katy Perry's Roar and Fireworks and presented one of the coolest musical tests in the group. The trot work was bouncy and forward, but in canter Miesner could not keep the horse closed and balanced enough in the frame. A hiccup in the changes happened. t<hey scored 76.485% for fifth place, less than a percent missing from a podium spot. One judge had them second (77.250%) another seventh (75.700)%.

Dutch Jill Bogers and the very young, 6-year old KWPN stallion Lennox U.S. (by Grand Galaxy Win x Rousseau) were also on a medal chase with many strong points in their ride: the trot half passes were flowing, the extended walk had good relaxation, and the extended canter was very uphill. Towards the end of the test, the stallion dropped in the poll and made an unscripted flying change at H. Also the end halt was not balanced but stretched with the hindlegs out. They scored 75.040% for sixth place. One judge had them third (77.250%), another 11th (72.000%).

And that concluded the 2022 Euros. Next year's edition for the junior riders will take place at the magical yard, Gestut Schafhof in Kronberg, Germany, where former German Grand Prix team rider Ann-Kathrin Linsenhoff will play hostess extraordinaire to Europe's best Children and junior riders.

Eurodressage photographed all riders competing at the 2022 European JR / YR Championships. If you are want to use our photos for social media or prints, email us first.