World Championships Berne 1966 Through The Eyes Of… 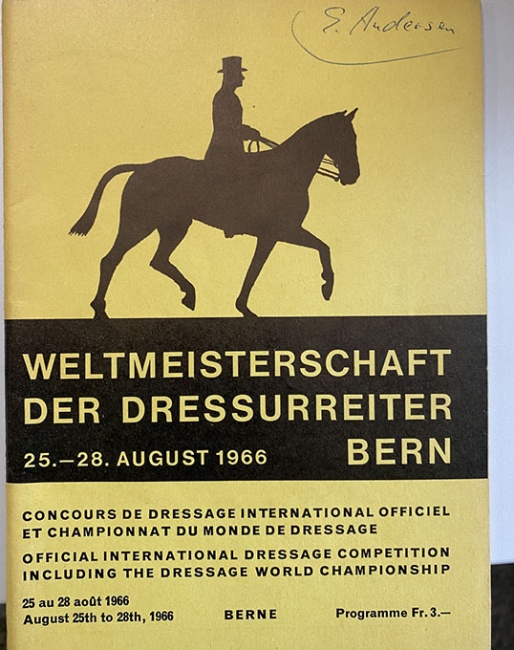 "That horses with training deficiencies managed to get into the top group shows that mistakes in the movements and thoroughness have not been paid enough attention to. Did the judges deviate from the principles of the FEI? As long as we have an International rule-book which had been written by men who himself had been great riders we should stick to it."
published in Der Kavallerist 9/1966

"The World championships in Berne 1966 had been the first international championships which I attended as a spectator. My then 14-year-old sister and me travelled to Berne to watch the 5 days of competition. We were enthusiastic and I only hold dear memories to this event. There were almost no German supporters except us and the German team, in particular Kurt Capellmann, took great care of us over the days in Berne. We felt completely integrated and celebrated the German wins. I do not remember many details from the competition itself, but I very well remember the different ways of warming up shown between the German riders and those from the Soviet Union. The Germans prepared the different Grand Prix movements with preparatory exercises like riding transitions between a gait. The Soviets in contrary exercised the movements rather contextless by riding walk, then the exercise, then walk, then another exercise. It was very interesting to observe the different approaches to prepare for the classes and the results.“

"In 1966 my boss Colonel Pierre Mange (head of the Swiss cavalry school at that time) assigned me to German Count Rothkirch and my task had been to take care that the Count is lacking nothing. He hold a clinic for FEI judges and judges candidates right after the World championships. This was a completely new experience for me and a great one.

What I vividly remember as well is that the EMPFA had been separated into two parts during the World championships: The Soviets on the one side, the rest on the other. One arena belonged to the Soviets. One time I observed one of their team riders train there. Their national coach talked to the rider for about 10-15 minutes, it felt an eternity. And the horse piaffed quietly under him the whole time, effortless and mechanic. Quite an impressive moment to witness for me.

I also remember that the Soviet delegation had people with cameras at every outdoor and indoor arena who filmed all trainings and then also competition rides of their rivals. What an expenditure!

The last thing which is in my memory of Berne 1966 is that we had a sand arena for the first time at international championships. After every few rides the arena was leveled by two horses and then groom Röthlisberger came with a small rake and marched straight away to C. There he turned around and did the same towards A. The centre line became perfect that way and the spectators clapped excitedly in rhythm.