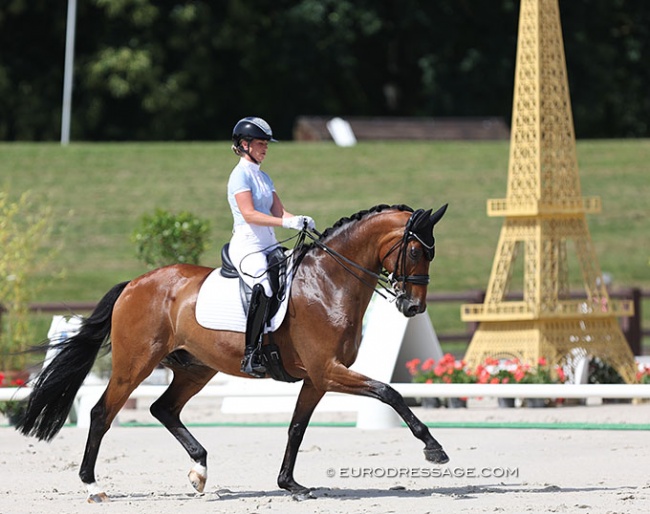 Between Paris and Versailles

The CDI Jardy was a brand new entry on the FEI calendar this year and able to attract a field of over 100 international competitors for its first edition. The venue is located next to the posh Parisian Bois de Boulogne and sandwiched by the French capital and Versailles, where Louis XIV's lavish castle is a tourist magnet even in 40 ° C temperatures.

Haras de Jardy has a long history of being one of France's premier riding clubs with over a 1000 members and year-long experience in hosting show, especially show jumping and eventing. The CDI was their first dressage international, but at the same time the show grounds welcomed over 600 competitors for a CDN that took place in three arenas the same weekend.

The Hill We Climb

A heatwave hit Europe that weekend and the organisation anticipated the tropical temperatures by re-arranging the schedule to include a 12h00 to 16h00 siesta break. On Friday the thermometer surged to the low thirties, but it was Saturday 18 June that turned out to be brutal for Western Europeans who were not used to that first summer heat of the year. On Sunday, the weather made a U-turn and rain showers in the morning cooled everything down to 15 C*.

Jardy is a green zone for the cosmopolitan Parisian suburbs and is a haven of tranquility. The arenas at the Haras were huge with lovely trails connecting them. The show ran very smoothly, with good stabling, catering, and an air-conditioned orangerie. While the footing itself was of high quality, the irrigation for the arenas was done "old school," show jumping style: there were no ebb and flow, lasered pistes, but each arena had a a central high point with the water draining downwards to the lower corners. While arena 1 sloped a little bit, arena 2 for the young horses and youth tests proved to be a challenge as it was a hill to climb with deep corners and a centerline that lay half a meter higher. If the arenas could be straightened to fit the standards of dressage, Jardy would be total perfection.

A large field of French Grand Prix riders were entered for the big tour and faced riders from 11 different nations.

French Olympian Morgan Barbançon has been focusing on bringing along her new rising star Habana Libre A (by Zizi Top x United) at Grand Prix level, while bringing back second ride Bolero (by Johnson x Vincent) who returned from injury, while her number one Sir Donnerhall II stayed home from the nations cup in Compiegne due to an allergic reaction. With the 10-year old Habana Libre A she won the Grand Prix on 71.065%, while the 16-year old Bolero carried her to victory in the Kur to Music. The Swiss based Barbançon made a big leap forward in her riding after she started training with Dorothee Schneider a few years ago. Most recently she switched to British Gareth Hughes for coaching to fine-tune her skills.

The second place in the Grand Prix went to the Belgian based Antoine Nowakowski on his 9-year old Hanoverian mare Quater Girl (by Quaterback x Don Henrico). After winning the CDI Sint-Truiden, the 30-year old rider is proving form and consistency with his chestnut mare. They were second in the Grand Prix with 70.695% and won the Special with  71.787%, ahead of Barbançon on Habana Libre A (70.404%).

Young Belgian Grand Prix riders certainly made their mark in Jardy with Flore de Winne and Amandine Prevost raising hope for a fresh influx of talent towards the 2024 Paris Olympic Games.

Flore de Winne and her very young, 8-year old Hanoverian stallion Flynn (by Fahrenheit x Sir Oldenburg) gave a little taste of what's in store in the future for this budding pair. The black stallion is very talented in the collected work and at his international Grand Prix debut immediately cracked the 70% barrier with a 70.326% score to place third in the Grand Prix. They were also third in the Special with 69.936%.

A month ago Belgian Amandine Prevost and the 12-year old Brandenburger stallion Quaterdance (by Quaterback x Expose) were the shooting stars of the 2022 Belgian Dressage Championships, where they won silver. The pair made its CDI Grand Prix debut in March in Ornago, Italy, and posted 68% twice. In Jardy, they shifted a gear and pushed their score to 69.826% for a fourth place in the Grand Prix and 73.730% to place second in the freestyle.

Text and Photos © Astrid Appels  - NO REPRODUCTION ALLOWED
Eurodressage photographed the riders competing at the 2022 CDI Jardy. If you are interested in our photos for social media or prints, email us.

Related Links
Scores: 2022 CDI Jardy
2022 CDI Jardy, New International in France, Steeped in History and Experience
2015 CDN Jardy Will Be Scene of the Come Back Kids