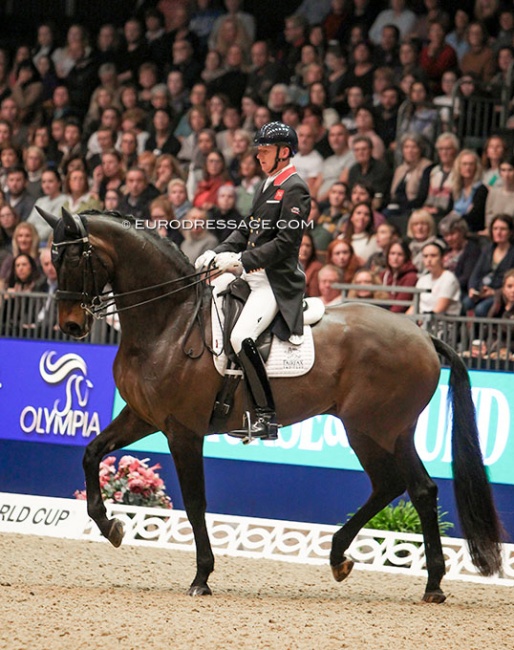 Even though his Olympic team horse En Vogue is ruled out for the 2022 World Championships in Herning due to injury, Carl Hester might have a little surprise in store. He has taken over the ride on Gareth Hughes' KK Woodstock for the summer.

KK Woodstock is a 16-year old Baden Wurttemberger bred gelding by Wolkentanz II out of Lerida (by Landioso x Kalman). He is bred by Matthias Schönenberger and owned by the Swiss couple Claudine and Martin Kroll.

KK Woodstock made his Grand debut in 2016 in Switzerland under Hans Staub, but after the Kroll family split from Staub in 2017, the ride was allocated to British Gareth Hughes.

He debuted the gelding at GP level at the CDI Hickstead in July 2018 and placed third with 71.217%. In 2019 the dark bay gelding was Gareth's back-up horse for Briolinca and showed in Hartpury, Keysoe, and at London Olympia.

With Briolinca sidelined in 2020, Woodstock became Gareth's number one in the race for Tokyo (which ended up being postponed by a year). The pair showed at CDi's in Le Mans, Lier, and Keysoe. The latter show in October 2020 being their last international.

Horse & Hound announced the news that KK Woodstock has become the temporary ride for Carl Hester with Herning in mind.

"Last week, the Krolls read online that Vogue was off, so they spoke to Gareth about offering me the ride on Woody for the summer,” Carl told Horse & Hound. “Gareth rang me up and said, ‘Hey mate, how’d you like to ride Woody?’ The Krolls and Gareth have been so generous in allowing me to ride him. Obviously time-wise it is going to be a big ask for me to gel with him, but so far I’m enjoying riding him. In my previous life I was always riding other people’s horses and getting catch rides, and here I am doing it again!”

Carl will need to score at least twice 66% at two CDI's to achieve the Fei's Minimum Eligibility Requirement and to be considered for the British team. He has planned on showing KK Woodstock at the CDI Wellington Heckfield mid June and Bolesworth, although it was announced that CDI Bolesworth has been cancelled.

The Bolesworth organisation is looking to add a condensed CDI into its show jumping programme on 28 June - 3 July in order for British riders to achieve their last scores before the cut off deadline at the beginning of July!