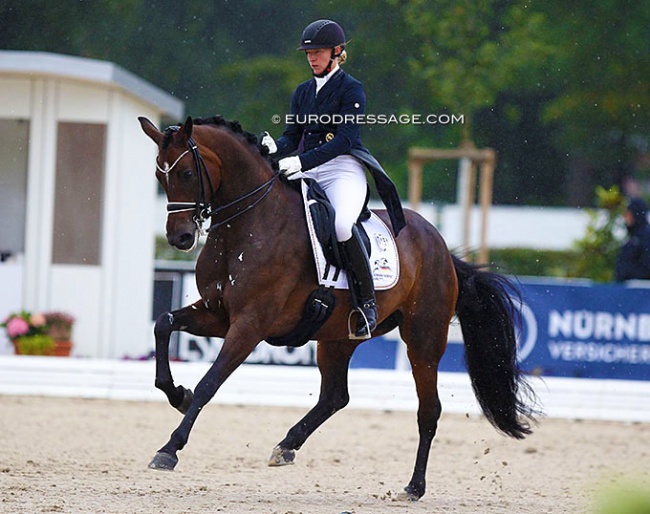 Quiana is an 8-year old Rhinelander mare by Quaterstern out of Rubina (by Rubinstern Noir x Kolibri). She is bred by Brigitta Wego.

For Nicole the home bred Quiana has a special place in her heart, born and reared at her parents' yard where there are two broodmares.

"Her birthday is in mid June so she was very young when she went to the foal shows," Nicole told Eurodressage. "Despite her young age she impressed with her smooth and high quality gaits. For me and my family she is something very special. That's how she gets her name. Quiana means the graceful one."

She was saddle broken at the Osthoff stud at age 4, before moving to Hof Kasselmann, where Nicole works. "She impressed with her rideability and after one week the riders said that their job was done," Nicole added.

The pair made its show debut in May 2019 at the local show in Bielefeld-Holtkamp.

Soon after clinched German team selection for the 2019 World Young Horse Championships in Ermelo, where they finished 10th in the 5-year old finals after placing second in the consolation class. A month later at the Bundeschampionate they were fourth.

Wego showed Quiana only once in 2020 in Ankum in November and placed second in the M-level test.

In 2021 they were selected again for the German team for the World Young Horse Championships in Verden, where they were 15th in the 7-year old final. The combination's last show together was in October 2021 in Ankum, where they were second in an S-level dressage test.

"I credit Fredric Wandres for pairing Quiana and I," Kate told Eurodressage. "He thought it could possibly be a really good match and sent a message to Nicole asking if she would consider showing me Quiana. I think he could see I was become quite discouraged after weeks away from home looking at horses, so he told me nothing but that “she is a 7 year old.” Since I a was mainly looking for another stallion I half jokingly responded to Freddy, “For a mare, she would have to be perfect,” to which he gave a mischievous smile. While Quiana isn’t the biggest mover, her suppleness, balance, and ease of the movements was unlike anything else I have experienced and she was everything I could hope for. "

Shoemaker finished fourth at the 2021 Tokyo Paralympics on the 14-year old Hanoverian Solitaer (by Sandro Hit x De Niro). She recently purchased the 5-year old Westfalian stallion Supreme (by Sezuan x De Niro) in The Netherlands, but is keeping him in training there with Bart Veeze. Quiana will join Kate in Wellington, Florida.

"I'm very happy that she will get a nice home with Kate," Nicole stated. "I'm so happy that they were able to become a very good combination with a lot of harmony from their first ride."

Kate added, "together with the Kasslemans, we’ve planned that Quiana with stay in Germany and I will join for 3 months of training and showing with daily help from Nicole. We are tentatively planning to compete locally and in the CPEDI’s at Doha, Qatar and Blue Hors in Denmark. Heading into 2022 I look forward to competing my WEG and Paralympic horse Solitaer under the continued tutelage of Lehua Custer as well as Quiana. Quiana will move to the states in early April and have some down time to adjust to Florida before we hopefully begin preparations to compete in the US final observation event for Herning."