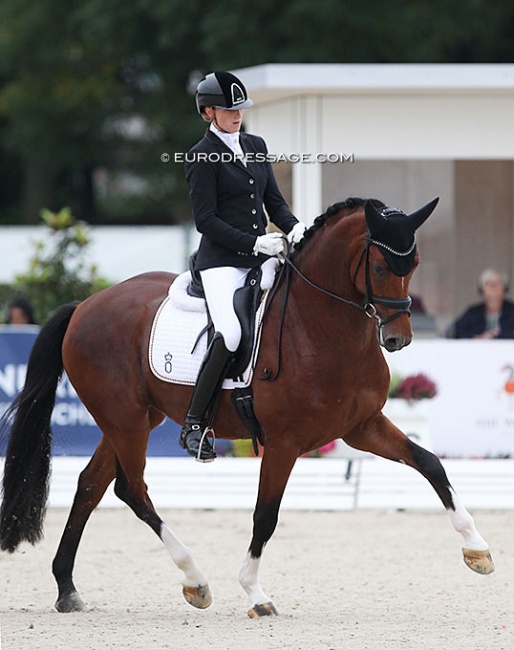 Francis Drake OLD is a 6-year old Oldenburg gelding by Franklin out of Dina (by Don Schufro x Akzent II x Rondo). He is bred by Jobst Hartmann.

The bay gelding first came into the spotlight at the 2016 Oldenburg elite foal Auction, where he was offered for sale and sold for 82,000 euro to Helgstrand Dressage.

He was presented at the 2018 Oldenburg Stallion Licensing but not accepted. He was gelded afterwards.

The bay gelding  proved his worth in sport and made his show debut only in 2020 as a 4-year old under Madeleine Bendfeldt. He competed in one show in Denmark, the Danish Young Horse Championship qualifier in Otterup, which he won, but then 2020 Nationals were cancelled due to Covid.

In 2021 he moved into training with Eva Möller at their German base at Gestut Framos. Möller premiered the bay in the show ring in May 2021 at the regional show in Okel at L-level and won this Bundeschampionate qualifier.

Shortly after the ride was allocated to assistant rider Leonie Richter in an attempt to qualify her as a rider on this horse for the Bundeschampionate and World Young Horse Championships with Möller already having a full book of horses to ride. Richter won the BuCha qualifiers in Verden and was selected on the German team for the 2021 World Young Horse Championships in Verden, where they finished eighth in the 5-year old finals. The pair did not go to the Bundeschampionate in Warendorf.

Francis Drake's talent and potential for the future did not go unnoticed and the horse's asking price almost doubled in the month of August 2021 after his results in Verden.

The Holdorf based Raupach family secured him in the autumn of 2021 for the 13-year old Martha to ride.

Young Martha made her international debut on pony Mad Max WE (by The Breas My Mobility x Sandro Hit) at the CDI Lier in Belgium in February 2020. A year later she thrived on horse Jack Sparrow (by Expression x Vivaldi) in the Children division and was selected on the German team for the 2021 European Children Championships in Oliva Nova, Spain, where she won team gold and finished fourth in the team test. With only three riders per country eligible to move to the individual final, Raupach's outstanding fourth place on 79.692% was the drop score (!) for Germany. At the end of 2021 Raupach premiered another horse at international children's level, the 11-year old Oldenburg Radission (by Rock Forever x Sevillano) at children level at the CDI-PJYR Aachen Indoor.

The Raupach family added another iron in the fire with the purchase of Francis Drake OLD. The new pair made its national show debut at the indoor competition in Vechta on Saturday 15 January 2022 and won the L-level dressage test with 74.086%.

"I've been riding him since October last year," Raupach told Eurodressage about her new winning horse. "I wasn't very nervous because always gives me the security and is just an insanely good horse."