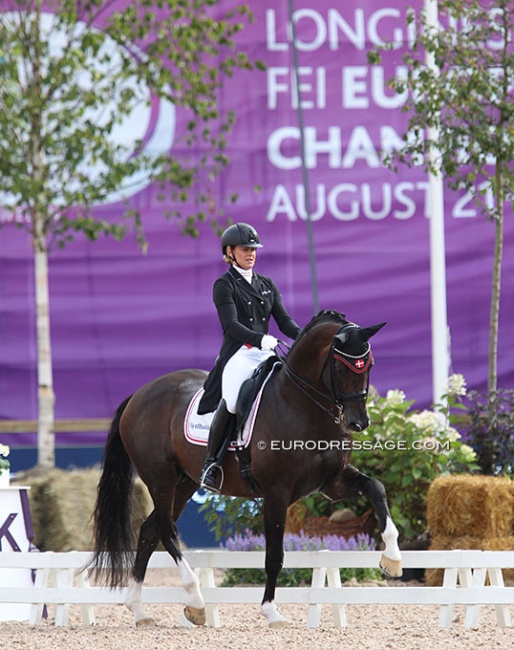 Danish former Grand Prix team rider Anna Zibrandtsen has retired her top horse Arlando from international competition sport. The Dutch stallion will continued to be ridden at home for fun and treasured by the family.

Arlando K is a 16-year old licensed Dutch warmblood stallion by Paddox out of Herlanda (by Mytens xx). He is bred by Teus and Judith  van 't Klooster in The Netherlands.

The breeders owned Arlando for 2.5 years and then sold half to Jan Folmer of stallion station De Nieuwe Heuvel, who is Diederik van Silfhout's uncle.

Aad and Lida Both bought shares into the stallion and the ownership continue  to change a few times between 2012 and 2015.

Under Diederik van Silfhout, the bay licensed stallion was competed nationally up the levels. In 2011 he had to be retired from the ZZ-licht Championships, but the next year he won bronze at the 2012 Dutch ZZ-Zwaar Championships. He leapt to Grand Prix level the next year.

Arlando made his international show debut as an 8-year old in the Under 25 division at the 2013 CDIO Aachen, where he finished third in the freestyle.

In 2014 van Silfhout moved into the senior ranks with then 9-year old stallion and after competing him in Drachten, Vidauban, 's Hertogenbosch, Arnhem, Rotterdam, and the Dutch Grand Prix Championships (4th place), they were nominated as reserves on the Dutch team for the 2014 World Equestrian Games in Caen, France, but ended up making it on the teal when Danielle Heijkoop withdrew Siro. They won team bronze and finished 11th in the Kur.

In 2015 the pair rode in Amsterdam, 's Hertogenbosch, won the Grand Prix Special at the CDIO Rotterdam, got bronze at the 2015 Dutch Grand Prix Championship, and qualified for the Dutch team for the 2015 European Championships in Aachen, where the Dutch team made a bang by winning team gold in the lion's den. They were 9th in the freestyle.

In 2016 Diederik had Arlando on a lighter schedule with Amsterdam, Den Bosch and Rotterdam as preparation for the 2016 Olympic Games in Rio. They won the 2016 Dutch Grand Prix Championship and then became fourth with the team and 11th in the freestyle finals at the Summer Olympics.  Their last two shows were the CDI Indoor Maastricht and Stockholm in the autumn of 2016.

For Sale - Not For Sale

As of 2015 Arlando was owned by Aad and Lida Both in partnership with investor Siem Kat, who had bought out Jan Folmer (De Nieuwe Heuvel). Nevertheless the name of Van Silfhout's family continued to be mentioned as co-owner with the FEI.

In the lead-up to Rio the owners were financially compensated by the NOP Foundation (Dutch Olympic Horse) for not selling Arlando and in November 2016 they all announced that a new rider contract with Diederik van Silfhout had been negotiated for 2017.

That rider-owner contract, however, did not serve a long purpose.  It was no secret that Arlando was for sale and Van Silfhout withdrew the horse from the World Cup qualifiers in Amsterdam and 's Hertogenbosch in January - March 2017, announcing small health issues, but it was an omen for the pending sale.

Zibrandtsen had set the 2017 European Championships in Gothenburg as her year target.

Their international show debut was at the CDIO Compiegne in France, where they were second in the Grand Prix with 71.680% but eliminted from the Special because the horse bit its tongue. They posted solid scored at the 2017 CDI Uggerhalne and participated in two rounds of the 2017 Danish Dressage Championships, placing 8th (70.420%) and fifth (72.451%). Team trainer Nathalie zu Sayn-Wittgenstein excused them from the freestyle. They confirmed form at the CDI Aachen with 70-72% scored and were selected on the Danish tea for the 2017 Europeans, where they won team silver and were the shooting starts of the show with a 6th place finish after a fantastic freestyle in the Kur to Music Finals.

2018 became a bumpy road for the pair. At the CDI Hagen they were on form, but at the CDI Uggerhalne got eliminated again for biting the tongue. They won bronze at the 2018 Danish Grand Prix Championship. They competed only in the Grand Prix class at the 2018 CDIO Aachen (70.435%), which was a team selection event. They withdrew from the Special.  They were named reserves for the Danish team for the 2018 World Equestrian Games in Tryon, but ended up being called up when Cathrine Dufour withdrew Cassidy. However, in the end the combination had to be substituted as well because Arlando suffered from lymphangitis in one leg shortly before the flight to Tryon. They were replaced by Rikke Svane and Finckenstein.

The 2018 CDIO Aachen turned out to be Zibrandtsen and Arlando's last international show in the stallion's career. They made one more start at national level in Denmark on 27 August 2020, scoring 70.467% in the Grand Prix.

Arlando took much longer than expected to recover from injury and never returned to the desired fitness level to be reinstated for top level international competition sport.  Anna has now decided to enjoy him at home.

"We will continue with "high” level training, because he loves to work," Zibrandtsen told Eurodresage. "The original plan was to retire him after Tokyo, but because of the injury 2018, and then COVID we didn’t had the possibility to make a nice farewell."

Anna shares the ride on Arlando with her mother Lisbeth, who inspired her to ride in the first place. "I got the interest in horses from my mom, who had horses since she was a teenager," Anna explained.

She is a long-time student of Swedish Jan Brink but most recently she has been working with Danish Cathrine Dufour.