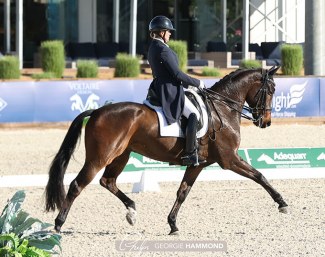 Riding down the centerline bright and early, a competitive field of seven small tour riders took to the ring in the 1* Intermediate I. Kristina Harrison-Antell was first to go in the class and she wowed the judges to ride away with the win with a score of 72.412%, while Claire Darnell won the 3* Intermediate II later Sunday morning with a 69.882%.

No stranger to the winner’s circle, Harrison-Antell won the 1* Intermediate I on I Felix (by Fidertanz x UB 40), Jocelyn Towne’s 8-year-old KWPN gelding. During Saturday’s 1* Prix St. Georges, the pair received an impressive score of 75.049%, which was over 5 points higher than second place.

Based in Los Angeles, California, Harrison-Antell found the bay talented as a 2-year-old and has been enjoying bringing him up the levels. Earlier this year, they won the reserve tricolor ribbon in the American Developing Prix St. Georges National Championship at Lamplight Equestrian Center in Wayne, Illinois. Since their trip to Illinois, Harrison-Antell has focused on developing I Felix’s strength for his pirouettes and after receiving a few 9’s throughout her test for their 2-tempi changes and trot half-passes, she was ecstatic with his Intermediate I debut this week at DIHP.

"This was his first Intermediate I ever in his entire life and he was fantastic. He’s fiercely brave. He’s hot and quirky but he’s been so loyal and as honest as can be – one of the biggest hearts I’ve ever come across," said Kristina. "His changes are amazing. I’ve never had a horse with such amazing changes. I honestly don’t think there is anything that this horse doesn’t do well. He’s so lovely in my hand and gives me such a nice feeling.”

Kristina plans to spend her first winter in Florida and is taking six horses and I Felix.  "We are headed to Florida for February and March. This will be my first time ever going down there to ride because I received a high performance grant from the Dressage Foundation on my Grand Prix horse," she said.

Riding into second place on a score of 70.647% in the Intermediaire I was Rebecca Rigdon on her 8-year-old KWPN mare Iquem (by Charmeur x Moreno). Hot on her heels with a score of 70.323% was Nick Wagman who placed third in the class on Heatcliff (by Florencio I x  Olivi), a 9-year-old KWPN gelding owned by Beverly Jean Gepfer.

After dominating the Small Tour in last year’s Desert Dressage series, Darnell has been working hard to move her 9-year-old KWPN gelding Harrold S (by Vivaldi x Fidermark) up to the next level. She made the long trip down from Mount Vernon, Washington well worth it as she won both Medium Tour classes, although there was just one rider in them. First she took home the blue in the 3* Intermediate A with a 70.49% before returning Sunday to top the  3* Intermediate II with a 69.882%.

“I’m feeling really good about both of my tests this weekend – it was our first Medium Tour CDI," said Claire about Harrold S, who she started riding in December 2016. "We were here last year and won the Small Tour CDI so it’s exciting to move him up and receive similar scores. The judges complimented me for my lateral work, which we tried to improve from yesterday’s test.”

In the final CDI class of the weekend, the 3* Grand Prix Consolation, Matthew Cunningham and Ribery 27 (by Rock Forever x  Florestan I) , an 11-year-old Westphalian gelding owned by Jeri Walz, took the win with a 67.137%. Croatia’s Karen Pavicic placed second with a 66.268% on Totem (by Totilas x Donnerhall), a 9-year-old Hanoverian gelding she owns together with her husband Thomas Baur.