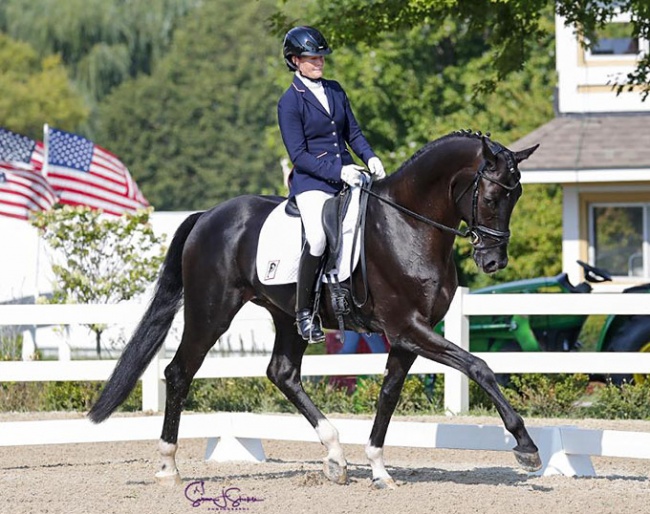 Fifteen combinations rode the USEF Four-Year-Old Horse Test for the second time to close out the U.S. Young Horse Four-Year-Old Dressage National Championship. The first round counted for 40% of the total score, the second round for 60%

Fontenay is only newly arrived in the U.S. and the partnership with Evans is brand new. "The test itself, I did start to run out of steam," she said. "The poor guy, we’ve only had him a few months, but he has just been taking everything in stride. And I know that his owners are both so excited to have him here and happy that it all came together so wonderfully. He really just has the greatest mind, and even though he lost a little steam, he still was really trying hard. I’m sure that as he gets a little stronger and used to it, the sky is the limit.”

Alice Tarjan (Oldwick, N.J.) and Ierland’s Eden, her Oldenburg mare (by Ierland x Lace Eden, by Krack C), won Saturday’s class with a score of 8.800 to earn the reserve-champion honors with an overall score of 8.616.

"This one I got from a good friend of mine over in Denmark," said Tarjan. "I got her as a two year old and we broke her last year. She was actually quite difficult to break, I didn’t think we were going to get the job done, Kasey Perry-Glass’s husband Dana Glass broke her, and it took a couple of months. She has turned into a really reliable horse. It’s funny, people will tell you ‘oh 30 days under saddle, they look so easy!’ and I don’t know. I think you need at least six months to really know. I think that it’s going to be a good grand prix horse; she just needs a little time. Right now, she actually is super easy, and very reliable."

Lindsay Holleger and MW Fürstencharmant, Jennifer Vanover’s Oldenburg stallion (by Fürstenball x MW Weiss Schwarz, Sir Donnerhall I), were third with an overall score of 8.392 and won the Highest U.S. Bred Horse Award for the division.

"He’s the sweetest boy," said Holleger. "He is so reliable, so sweet. I broke him, and he’s just so easy, he’s so sweet he’s so game. He’s a stallion, but he goes around like a perfect gentleman all of the time. I love him to death.”

“I was a little amazed at the scores today,” said Orlob. “Obviously, it’s great to get two tens, but I’m blown away. I think he deserves it. He’s a really fantastic horse. I think we were delighted by the quality of the horse.

Orlob is thrilled about the quality of his horse. “He is never tired. He is very energetic, and he loves to work, coming out every day at 100%. He was a little fresh in the warm-up, and then when they were clapping he was more tense, but after a few minutes he settled in nicely and I knew that I would have a good ride if I didn’t mess up. I did mess up, so I’m mad at myself, but stuff happens. I’m glad that I have a good horse that makes up for my mistakes. He has such a natural talent for self-carriage, the lightness, the power. I think that this will be a good grand prix horse.”

“She is an incredible horse," said Hope. "I have been with her through this whole journey. I am in Catherine Haddad-Staller’s program, and it shows that hard work and good training pay off. We took this horse from a good horse to an excellent horse, and I’m excited for her future. I was blown away with the scores. Catherine bred her, and I moved here when she was three and I broke her. I find American dressage very supportive. It’s a very nice environment and I really appreciate that.”

Katryna Evans (Bailey, Colo.) collected her second medal of the show. After gold in the 4-year old class she also won bronze in the 5-year old division on Møllegårdens Fashion, Dr. Cesar and Marcela Parra’s Danish Warmblood gelding (by Florenz x Møllegårdens Kantarel, by L’Espoir), were third with an overall score of 8.700.

“I also have a really great horse," Katryna rung in. "I’ve only been riding him for a little while. Very talented horse, great brain, and, obviously, it’s a long week for these horses, and it’s a lot coming all this way, but it’s a great environment for them to learn.”

“It feels amazing and unexpected,” said Bendfeldt of the win. “I am super satisfied with the test. It was fine. Of course you always have something that you’d like to do better, but the mare was really good and I had a nice feeling, so I am super happy."

Bendfeldt added, “Sonata is quite uncomplicated. I think that her favorite thing to do is eating, that is more important than anything else. You know when she is comfortable because she will stretch before you put the saddle on. She is a funny personality. Here she felt nice and comfortable, and the week was fine! She is pretty even all of the time. There are not really ups and downs with her. It’s the same without being boring.”

"I found her in Germany when she was two-and-a-half and just broke, and I sat on her for a second and she trotted and so I said, ‘If she canters, I’ll take her!’ The seller said ‘No, she hasn’t cantered yet,’ but I cantered her a couple of strides and I decided I would take her," said Blake. "The horse peaked this weekend. She’s been slow to develop, a little immature, and now, all of a sudden, she got here and said, ‘Alright, I’ll take care of the rest.’ She’s a great horse with a lot of feeling, and very fun.”

Alice Tarjan and Summersby II, her Oldenburg mare (by Sezuan x Summer Night, Sandro Hit) were third with an overall score of 7.912.

"I bought Summersby as a foal, and she competed here as a four- and five-year-old, and to have her finish third today is awesome," Alice explained. "She’ll probably stay home next year and prepare for the Developing Horse Grand Prix.”