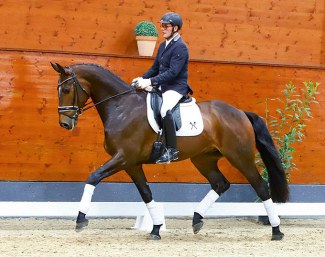 The top-priced horse at the 2021 Verden Auction Online in July was Saint Jacques, for whom the virtual hammer fell at 56,500 euro. After the 10-day auction period in Verden, which was used by numerous interested parties to try out their dream horse, 56 young talents were sold for an average price of an average of 20,205 euro.

Trying out at the Niedersachsenhall at your leisure and then bidding from the comfort of your own home. A new customer from Hamburg did just that and showed stamina. A total of twelve bidders were interested in the Scolari x Weltmeyer son Saint Jacques (breeder and exhibitor: Jochen Meyer). After 83 bids, the bidding for Saint Jacques ended at 56,500 euro.

The Gentleman x Fly High son Globetrotter (breeder and exhibitor: Horst Heidemann) sold for 28,000 euro. This made the responsive, large-framed bay the most expensive jumper in the collection. He is in good hands, regular customers from Hessia have already discovered numerous top-class horses in Verden and brought them into sport.

To buy horses directly at the source without having to be on site and to be advised -  competently and confidentially – that is what many international customers appreciate about Verden. 34 horses will leave Germany. Nine horses are going to the United States, five to Finland and four to France.

The average price of 20,205 euro is about 4,000 Euros more than last year and is by far the highest price ever achieved at a Verden auction in July.