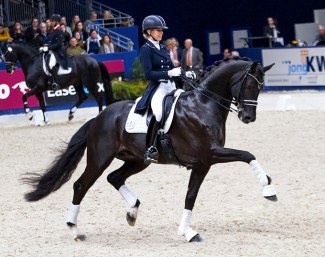 Stand Out in Breeding

Keur predicate, scoring 80 points on movement and 80 points on conformation at the KWPN Studbook/Star inspection. The jury reported, “This is a well-modelled mare with an appealing forequarters. She is well developed. The walk is broad and pure, and the trot is very supple and light-footed.”

He was imported by Iron Spring Farm in June and will be available by fresh, cooled semen to North American breeders beginning in July through the close of the ISF breeding season on August 13.

Special thanks to Reesink Horses and Stal Laarakers for their help in acquiring this special stallion.

Check out his winning ride in the CDI1* Prix St. Georges class at the World Championships for Young Horse here and visit his stallion page here for offspring photos, complete pedigree and more.