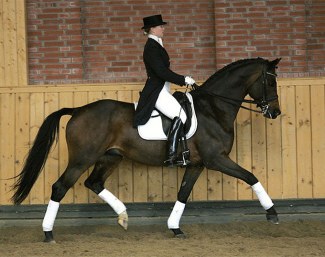 The Trakehner breeding stallion Couracius died suddenly and unexpectedly at his home, Gestut Hörstein, on 27 April 2021. He was 20 years old.

Couracius was presented at the 2003 Trakehner Stallion Licensing in Neumunster and named reserve champion. He sold at auction for 60,000 euro to Wolfgang Diehm of Gestüt Hörstein.

Couracius' sport career was limited to just one show, according to the FN database.

In 2008 he competed as a 6-year old at the local show in Rohlsdorfer Beek under Finnish Grand Prix rider Terhi Stegars. He placed third in an L-level dressage test.

As a breeding stallion he produced no licensed sons and four state premium mares.

Twenty-five of his offspring are registered for sport with the German equestrian federation. One of them competes at S-level dressage: Clondike (under Tjorven Carina Keunecke).  In Austria, his daughter Shannon Queen is competing in international eventing sport.

As a dam sire, however, Couracius can be found in the pedigree of 2020 Trakehner licensing champion Rheinglanz