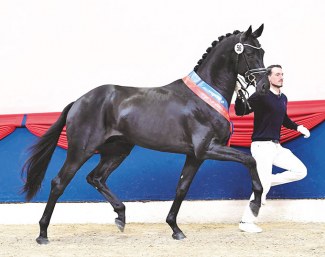 Splendid (by San Amour I out of N-Infinity by Dream Boy - Friedensfürst/T) is bred by Rob Zandvoort from Belgium, and became the champion of the 10th Oldenburg Saddle Licensing. He also turned out to be the auction price highlight.

For 515,000 euro, the noble black stallion sold to Swiss Adrian Gasser, who owns Gut Schönweide in Schleswig-Holstein. This makes him the most expensive champion of all ten saddle licensings so far.

The second most expensive stallion sold for 84,000 Euros: the third ranked premium stallion by Frascino out of Fahra-Diva by Lauries Crusador xx - Dormello - Placido. He is bred by Frank & Christine Lange and owned by Peter Aringer from Herford.

The stallion by Da Costa out of Dakota by Dankeschön - Hochadel, bred and exhibited by Arndt Schwierking, sold for 81,000 euro to a top dressage stable in Austria.

The most expensive non-licensed stallion was the Zonik One x Hotline x Rotspon colt which sold for 35,000 euro.