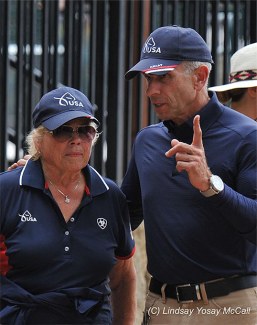 Michel Assouline started with the U.S. Para-Equestrian Dressage program in May 2017. His innovation and persistent drive to grow the sport and expand the program has impacted the whole Para Dressage community.

Through the pandemic, Assouline has helped several athletes work through emotional pressures and reposition athletes’ training schedules by utilizing technology and focusing on enhanced communication.

In three years, Michael has built a Para-Equestrian Dressage Coach Certificate Program that was rolled out across the country during the latter part of 2019 and early 2020 that received high participation with 32 coaches going through the program.

In March 2020, the U.S. Para Dressage Team ranked No. 1 in the world having achieved scores that would have tracked Team USA to be on the podium at Tokyo 2020.

At the heart of Assouline’s success is his ability to work with each athlete and build a specialized program around them to improve their development and performance, which can be seen in Roxanne Trunnell, who is currently ranked No. 1 in the world in her grade and overall across all five grades.

Michel Assouline was honored to receive this distinction:

"This is a huge honor for US Equestrian. This reflects on everyone's efforts, an immense team effort. A stone missing in the building blocks and this would have never happened. This award is phenomenal for the United States Equestrian Federation as USOC and USOPC equestrian coaching awards are not common. What it means first and foremost is having a strong presence on the US and Global sport stage now. I couldn’t have done it without every single athlete, groom, owner, sponsor, and all our USEF support staff, in other words the whole team. Thank you!"