Lana Portejoie Takes Over the Reins of Danzig W 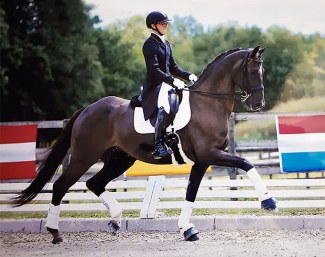 French Under 25 Grand Prix rider Lana Portejoie has taken over the reins of Danzig W from Charles Edouard Renaud.

Danzig W is a 12-year old KWPN gelding by Tolando out of Unariska (by Nourejev x Houston). He is bred by M. Wolswijk and has been owned by Franck Portejoie since 2014.

The horse has now been allocated to the owner's daughter, Lana Portejoie, who is based at their own yard, Ecuries de l'Aubois, where Renaud is an assistant trainer.

Lana began as an eventer, but switched to dressage as a pony rider in 2012 with Opale des Vent, Neervelds Blamoer, and Qoutsou. She represented France at the European Junior Riders Championships in 2014, 2015 and 2016 aboard Pik Flower (by Florencio x Stueben) and Zocraat (by Democraat x Rheinblack). In the autumn of 2016 she moved to Young Riders level and stepped up to Under 25 Grand Prix level in 2019 with Garzon VI (by Defo II x Barbaro II).

Portejoie is studying educational sciences and rides two horses at the moment: Darling de l'Aubois and her Grand Prix ride Garzon VI. She has been riding Danzig twice a week the past month and is assisted by Renaud.

"Charles' goal is to reach the Pro Elite level (senior GP) and that is why he hopes to improve the piaffe and confirm the canter movements on Danzig," Lana told Dressprod. "We have therefore decided to swap horses a few times a week so that he develop his feeling and optimize my work on Garzon and help me on Danzig."