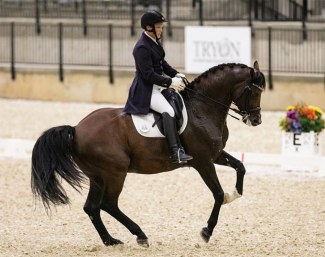 Abraham Pugh (USA) and Elfenperfekt grabbed their first career CDI wins together at the 2020 CDI-W Tryon on 23 - 25 October 2020 held at Tryon International Equestrian Center, the venue of the 2018 World Equestrian Games.

Pugh and the 14-year old American bred Trakhener stallion Elfenperfekt (by Peron out of Elfentraum, by Zauberklang x Donauschimmer), bred and owned by Alice Drayer, claimed the Grand Prix on a score of 68.109% and topped the Grand Prix Freestyle with a score of 74.010%.

"He Keeps Getting Better"

Pugh and Elfenperfekt have been together for seven years now, he shared, and they keep “getting better and better” as they go.

“My weekend went really well. This is our first time winning an international competition like that, so it’s pretty special. He just keeps getting better, and I keep getting better, so it’s really exciting. He really is a great partner,” Pugh shared of his mount. “He really will try his heart out for me day, in and day out; he doesn’t tell me no. He comes to work the same horse, whether we are at a show, whether we are in a big environment or a small environment.”

Though successful all weekend, Pugh noted that his mount only improved throughout the competition.

“I felt like today, I was able to have a little more fluidness and I was able to push him just a little bit more, without him being out of his comfort zone. Today we went out and I asked him for everything he had, and he answered and powered through it. The plan is to keep competing with him and seeing where we can go in the CDI ring!”

The Trakehner stallion Elfenperfekt was first competed in the U.S. as a youngster under Wanja Gerlach. He received his American Trakehner Association licensed status in 2018 based on his performance record.

The 41-year old Pugh, who hails from Greencastle, PA,  made his show debut on his American bred Trakehner in 2014 and his CDI debut at small tour level in Devon.

This year the pair competed in the international arena at the Global Dressage Festival in Wellington for the first time, but the pair got eliminated from the Grand Prix at the Palm Beach Derby.

When asked if there will be be a re-run in Wellington in 2021, Pugh replied.  "I’m not sure if we will go to Florida or not, but we are definitely going to try and come back here in the spring.”