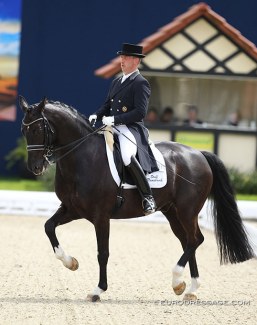 He is bred by Elisabeth and Friedhelm Demey and was owned by horse dealer Heinrich Ramsbrock.

With Burger on the Way to Grand Prix

Sergio was first competed as a 5-year old by Hans Rukwid, who took him from A to L-level in two years.

German professional Hermann Burger, who is trained by Bernhard Fischer and Johannes Augustin and based with his business at Ramsbrock's yard in Menslage, took over the rode on Sergio and first showed him at M-level in May 2016. That same year he moved him up to developing Prix St Georges horse level and presented him at regional shows in Germany.

In 2017 Burger rode Sergio once in a Developing Grand Prix horse class, but kept the horse at small tour level the remainder of the year. With an S** victory on Sergio at the local show in Timmel, Burger finally achieved his Golden Rider Badge after 10 years.

From 2017 till the summer of 2020 Burger and Sergio kept switching between small tour, medium tour and developing Grand Prix level classes at regional shows in his area. They were yet to make their debut in a classic Grand Prix test.

The 35-year old Harrington made her international show debut in January 2018 at the CDI Wellington, competing on Wakefield's now 14-year old Hanoverian gelding Wizard of Oz (by Weltmeyer x Landadel), who is bred by Heinrich Ramsbrock. The duo's career high point so far was a second place in the World Cup qualifer in Devon in 2018.  As of the autumn of 2019, Harrington began showing Wakefield's 10-year old Hanoverian mare Siri (by San Amour x Rubin-Royal) at international small tour level.

Harrington and Wakefield are business partners in Three Oaks Farm, an equestrian yard owned by Wakefield in Batavia, Ohio. Sergio is shipping to the U.S. this week.

"Sergio was first shown to us when we were there in 2016 but he wasn’t for sale," Harrington told Eurodressage. "Heinrich (Ramsbrock) is one of my strongest supporters and wants me to reach the top of the sport. Heinrich has turned down offers for Sergio for years, but the timing was right and he wanted us to have the best horse to compete with for this year. He knew from past experience that Sergio’s care and training would be outstanding. Sergio is a very special horse to Heinrich, his long time trainer, and to me. I am very excited about our future together!"