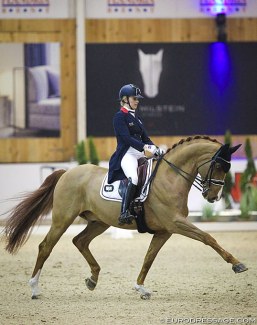 Belafonte is a 16-year old Hanoverian stallion by Belissimo M out of Wendy (by Wendekreis). He is bred by Ingo Rosenberg.

The liver chestnut stallion has already amassed a long list of achievements under numerous riders on both sides of the Atlantic.

Belafonte disappeared from the scene for five years, to resurface in 2014 after selling to  Canadian young rider Naima Moreira Laliberté, through German horse dealer Jochen Arl. The new pair made its international debut at the CDI Cedar Valley in June 2014. Moreira rode Belafonte for Canada at the 2015 North American Young Riders Championships in Lexington, where they won individual test bronze and kur gold. 2016 was their last competition season together.

In September 2018 British Ellen "Ellie" McCarthy purchased the stallion at Andreas Helgstrand's yard after having acquired her other Under 25 horse there, the Oldenburg stallion Sir Lancelot M (by Lordanos).

McCarthy made her show debut on Belafonte in the small tour at the CDI Le Mans in October 2018 and actively competed him in the U25 division in 2019. They went to shows such as Lier, Saumur, Uggerhalne, Stockholm, Riesenbeck, Hickstead and Le Mans. This year they competed at the 2020 CDI Gothenburg right before the corona outbreak.

McCarthy decided to sell Belafonte as a junior rider's horse to Annabella Pidgley, who is now in her last year on ponies and is preparing for the transition to junior level.

"He is 16 now and I would like him to step down a couple of levels to what he is best at," McCarthy told Eurodressage. "I think for sure Annabella will be on the team with hum next year because there are not many other junior horses of his quality in the U.K. and she is a great rider. I am really happy they have him because they only live an hour away from me and I know he will be really spoiled."

Pidgley had planned on competing her palomino Cognac in her last year on ponies in 2020, but the competition season is now in limbo because of the corona pandemic. Annabella, who is based at her parents' Kilbees Farm in Windsor, has three further horses in training with Cathrine Dufour in Denmark: the 6-year old Espe (by Escolar x Dimaggio), the 7-year old Vamos Amigos (by Vivaldi x Hotline), and the 8-year old Hilus MBH (by Johnson x Don Primero).