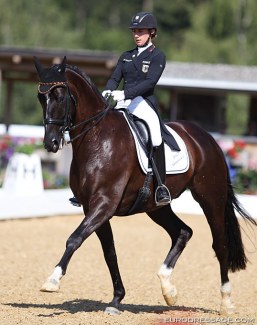 Diabolo is a 12-year Hanoverian gelding by Don Crusador out of Wega (by Weltmeyer). He is bred by Fritz Kleine and was initially owned by Helmut von Fircks of Gestut Nymphenburg.

The black gelding's first claim to fame came in 2013 when he represented Germany at the World Young Horse Championships in Verden, Germany, under Johanna von Fircks. The pair finished 13th in the Finals. Two years later Nymphenburg's then stable rider Tessa Frank rode him in t he 7 and 8-year old pilot project in Verden and landed 7th place.

In 2016 Cosima von Fircks took over the ride and made her international debut in Vienna in September 2016. In 2017 they did Wiener Neustadt, Hagen, and Aachen in an attempt to gain a spot on the German junior team. In 2018 they only did two internationals, the CDI-Y Hagen and Fritzens.

Diabolo sold to the Stuhldreier family as a junior horse for pony rider Laura Stuhldreier. The new duo made its debut at the 2019 CDIO-J Saumur and went on to ride at young riders' level in Deauville, where they won two out of three classes.

Diabolo has now moved on to another junior rider, the Hagen based Leonie Koch, who has been competing in the international Children's division the past two years with Schakiro Pilekaer (by Don Schufro x Ferro) and Floriano HB (by Florenciano x Rockwell). Koch will turn 15 in September and is now making a transition to junior level.

"We're using the current situation of no shows as an opportunity for the new rider to take her time and to build a partnership of trust in all quietness," said Cosima von Fircks about her former horse Diabolo moving to Koch.