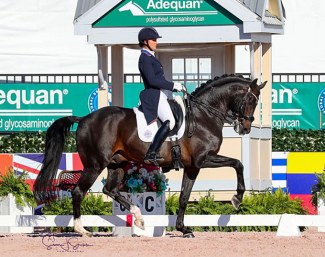 It was a heady day of new personal bests, with both Adrienne Lyle (USA) and Olivia LaGoy-Weltz (USA) bringing their A-game to the Grand Prix Special 4* at the 2020 CDI Palm Beach Derby on Saturday 29 February 2020.

Lyle ultimately came out on top with a dazzling display on Salvino, garnering 80.17% in week eight of the 12-week Global Dressage Festival (AGDF).

This may have been his first show since Aachen in July 2019, but Salvino showed no signs of ring rustiness. He and Lyle produced another harmonious performance to remain undefeated this week, and their quest for an Olympic berth remains on track.

LaGoy-Weltz and Lonoir, her own and Mary Anne McPhail’s 16-year-old gelding by De Noir, scored a new personal best of 75.617% for second place. Another American lady rider filled third: Jennifer Schrader-Williams rode the 17-year-old Millione, by Milan, to 71.064%.

“I’m amazed,” beamed the 35-year-old from Idaho. “I couldn’t have asked for anything more from him. The test was everything you’d hoped in the back of your mind that you’d be able to achieve. I didn’t say it out loud, but I was secretly hoping we’d get at least close to 80%.

“We’ve had him for five years now, and been showing the grand prix for three years, but developed him slowly,” said Lyle, who debuted Salvino at big tour at GDF three years ago. “I’m sure lucky to have the support of Betsy [Juliano] as an owner and Debbie [McDonald] as a trainer who believe in developing them slowly. We always thought he had talent, but we took our time and now he really feels like he’s ready to put it all together. He’s at a place in his mind and body now where he’s able to be consistent and not be stressed about doing any of it.

“He didn’t change at all [from the warm-up]; he didn’t get hot or dull or strong and that’s huge for us,” she added. “To get those last few little points, it’s all about the refinement and the rideability. He’s the coolest thing I’ve ever sat on. To get an 80% in a grand prix is something not many people get to do and it’s an incredible honor to sit on him.”

Owner Betsy Juliano was ringside to watch her horse perform. She said: “That horse trusts Adrienne for every single second. She trains him with complete empathy and understanding and thoroughness, so what we see here in the arena is the result of all that. Every single day. She knows every molecule of that horse, so as an owner I rest every night knowing that he’s in the best hands.

“I’ve never sold a horse; any one I’ve ever acquired will be kept for life and that will be the same for him,” added Juliano, who purchased Salvino through German horse dealer Jochen Arl. “It’s important to me that the rider has that security, but also I’m not in it to make money. We do talk about probably breeding him once his competition career is over, but not until then, because we want to keep him focused on this.”

Sarah Lockman (USA) wiped away tears when her and First Apple’s winning 71.128% score was announced in the Grand Prix Special 3*. This was the pair’s first ever big tour international victory, having finished second in the qualifying grand prix after a miscommunication on the final center line pulled the score below 70%.

Grand prix winner Diane Creech (CAN) rode Louise Leatherdale’s 12-year-old Lavallo gelding Chrevi's Christo into second in the special with 70.468%. Japanese riders have been featuring heavily in the ribbons this week and Masanao Takahashi continued the trend, finishing third with Eaton, an 11-year-old by the Jazz son Wynton (69.298%).

Fighting back tears, Lockman said: “I feel so blessed just to be here and it’s special because his owner Gerry Ibanez passed away recently. I really wish he could have been here because he’d have been really proud. His wife and family are here supporting me which is amazing; this is everything he dreamed of us and helped us create, so it’s really exciting to see it all happen.”

First Apple was the youngest horse in the class at just 10, but his quality was evident and he was showered with eights all over the test. The only blip was an early change at the end of the extended canter.

“That was really amazing to ride,” enthused Lockman, who found the horse with Dutch Olympian Patrick Van Der Meer in the Netherlands 18 months ago. “From the moment I sat on First Apple, he was just mine. It’s been amazing from the beginning. That was only my second ever grand prix special in my entire career and the horse’s second so we’re still trying to figure things out but he’s really special and gave me 100%.

“He’s very young, but the horse has zero weaknesses. There’s a lot more in there and we’re just scratching the surface right now. Every week there’s another notch. I think he is an over 80% horse, it’s just a matter of time and we have a lot of polish left to do. This is the first horse I’ve ever had that could really go on the world stage and hold his own. Not many people get the chance to sit on a horse like that.”

Lockman, who won individual gold at the Pan Am Games and trains with Scott Hassler, is hoping to be selected onto the squad of up to eight USA combinations to go to Europe and battle it out for a place on the team for the Tokyo Olympics.

“I’ve ridden with Scott for the last six years and he stuck with me when I had 50 horses of all different sizes and shapes and colors in training and when nobody else wanted to come to my farm and go in the trenches with me,” added Lockman. “Scott saw a glimmer of stardom and has been with me from being a nobody to this point. His loyalty and his help is incredible.”

Endel Ots continued his high-scoring winning streak at small tour, taking the Intermediate I 1* with 76.177%. He was riding the American-bred 11-year-old mare Sonnenberg’s Everdance, who is still owned by her Oregon-based breeders, Sonnenberg Farm. Judge at C, Stephen Clarke (GBR) awarded the daughter of Johnson a 10 for her entry and halt in her first ever CDI appearance.

The podium remained unchanged from the previous day’s Prix St. Georges, with Jami Kent posting 70.882% for second place on Gatino Van Hof Olympia, by Apache, and Meagan Davis filling third again on Damocles HLF, her own 10-year-old gelding by Diamond Stud. Riders from the USA swept the board in this class, filling the top five slots in the 10-strong class.