Getting a Pregnancy from a Deceased Mare Utilizing ICSI 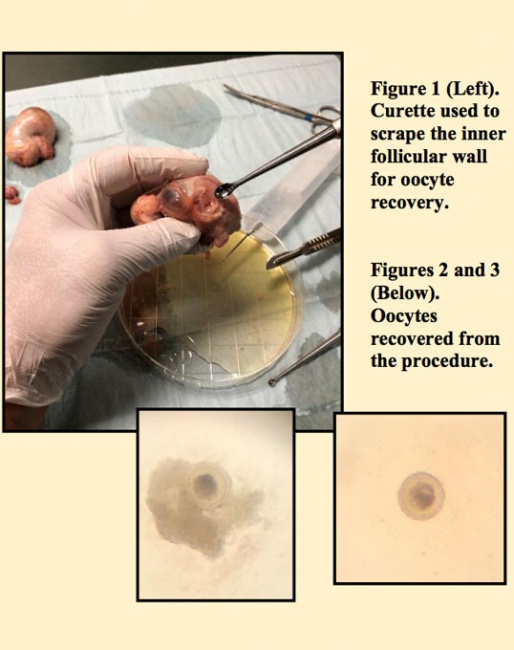 A Case Study: Getting a Pregnancy from a Deceased Mare Utilizing ICSI

For many years, we were successful in getting embryos from a well-bred Quarter Horse Mare. However, as she started getting older her uterus became increasingly vulnerable to fluid accumulation and repeated infections. After 2 years of not recovering viable embryos, the owner decided to retire her from breeding. Then recently, we received a phone call from the owner sharing with us that this mare is succumbing to years of dealing with chronic laminitis. It has been difficult for her to stand these days so euthanasia now seems to be the next logical step. They knew this day would come at some point so plans were already in mind for the next phase.

Harvesting Ovaries from a Deceased Mare

At 20 years-of-age, the mare was euthanized at our facility. Immediately after euthanasia, the ovaries were harvested and prepared for oocyte recovery.

Both ovaries were rinsed with sterile saline, trimmed of any loose tissue and kept at room temperature (~23oC). Over the next 1.5 hours, each ovary was digitally palpated to identify obvious follicles. Once a follicle was located, a surgical blade was used to slowly cut through the wall. The ovary was held over a large search dish in anticipation of follicular fluid leaking out once the wall was compromised. Following the incision, the follicular cavity was flushed with embryo flush media. Depending on the size of the follicle, the inner wall was then repeatedly scraped with either a small (3-5 mm) or large (5-11 mm) bone curette. This was followed by a thorough rinsing of the cavity and curette with more embryo flush media. Once 1 follicle was effectively dealt with, we would then continue our search for more follicles.

Because follicles can be very small, it is not uncommon to inadvertently cut into one while cutting away stromal (connective) tissue. Therefore, we periodically would rinse the ovarian tissue with flush media just in case an unforeseen follicle was penetrated. Each ovary was thoroughly dissected in an effort to find all perceivable follicular structures. Once complete, the search dish was examined for any oocytes recovered. It was estimated that between 13 to 15 follicles were disrupted and flushed.

This resulted in the recovery of 11 oocytes. Following identification, these oocytes were rinsed and packaged in an 5-ml falcon tube containing embryo holding media (Emcare). The oocytes were then placed in an Equitainer cooling device with 1 coolant can at room temperature and the other placed in a 5oC refrigerator 1 to 2 hrs before shipment. The effort was to try and maintain an internal temperature no lower than 15oC.

Coordinated efforts were already in place to ship these oocytes to another facility for oocyte incubation and sperm injection. Since oocytes can rapidly degrade following excision, it was important to get these oocytes to their destination as quickly as possible. The mare was euthanized at approximately 4:00 pm ET, and the oocytes were on a flight 6 hours later.

Early the next morning, they were received and processed for incubation. Of the 11 oocytes that were incubated, 4 of them matured to the point where sperm injection could occur. Intracytoplasmic sperm injection (ICSI) is a process by which a single sperm is directly injected into a mature oocyte. Further exposure to specialized media and incubation following the injection will help foster the possibility of cell cleavage. Fresh, cooled or frozen semen can be used. In this situation, frozen semen was used from a well-known stallion.

The oocytes were monitored over the next 7 days for development. Of the 4 oocytes that were injected, 2 of them showed signs of cellular cleavage, but only 1 continued development and became an embryo that was transferrable.

At Day 7 post-injection, an embryo at the morula stage was then shipped back, via airlines, to our facility using a portable incubator that maintained a temperature of 38oC. In preparation, a recipient mare was already coordinated to be at the appropriate stage of the cycle for the embryo. Developmentally, this embryo was a Day-6 morula. We transferred it into a recipient that ovulated 4.5 days earlier.

Over the next 7 days, all parties involved were anxiously awaiting the results of this endeavor. Could it be that this lone oocyte that was recovered 14 days earlier, actually result in a pregnancy? It faced scraping, rinsing, travelling over 1,600 miles to get poked and insulted, only to travel again a great distance for placement into a foreign uterus.

Nevertheless, much to everyone’s delight, a healthy embryonic vesicle was detected on the first ultrasound exam. Subsequent exams found a healthy developing pregnancy with the presence of a fetus and heartbeat.

This is a testament that advanced reproductive technology can be of great benefit under the most trying of circumstances.