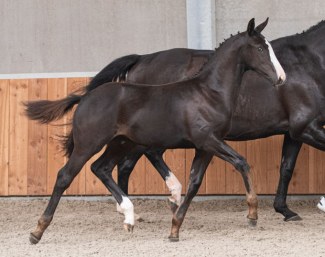 From today it is possible to bid on the foals of the fourth KWPN Online Foal Auction. A total of 35 foals, 21 dressage- and 14 jumping foals are looking for a new owner.

The past three auctions have shown that there is plenty of (foreign) interest in the foals. In the previous edition an embryo was sold for €35.000,- to Great Britain. This collection also contains some interesting highlights. Bidding is possible from today, the auction will close on Monday evening September 23rd from 8PM.

Looking for new talent? Take a look at the collection of the fourth Online Foal Auction. Many of these foals are coming from proven damlines. These quality mares are paired with proven or promising stallions. For example; Totilas son Ophion HL comes from the Elite mare Rhea, who performed at Z2 dressage level herself and already produced several succesfull dressage horses.

The stallion Just Wimphof, who scored no less than a 9 for his trot at the World Championships Young Dressage horses 2019 under the saddle of Renate van Uytert - van Vliet, sired five foals in this collection. Ohio Boy KS’s dam has proven herself already in sport and received the Elite Predicate. Also the granddam and great-granddam of Ohio Boy KS had a successful sport career. This damline produced already several small- and medium tour dressage horse, as also Tommie Visser’s Grand Prix Horse Chuppy Checker CL (by Osmium). The elite-mare Bora (by Indoctro) performed up to ZZ-licht and in combination with Just Wimphof she gave the colt Oreo. His grand-dam was ridden in the United States in the national dressage sports and classified in the 1.30m.

As a five-year-old he became World Champion at the World Championships for Young Dressage Horses and previous edition he won the silver medal with Andreas Helgstrand. Filly Ona Lyndi B is an offspring of this successful young stallion. Her granddam produced sporthorses Blom Gatino from Hof Olympia, Blom’s Hotmail and also KWPN approved Santano.

In the second edition of the KWPN Online Foal Auction, a daughter of Glock’s Toto Jr. was sold for €10.000,-. This collection also contains a descendant of him. The dam of Glock’s Toto Jr. son Odin, the Elite mare Extra d’Ottie is a full sister of ZZ-advanced horse Horacia (by Jazz) and a halfsister of Cadmium (by Rhodium). Small Tour horse Engel D’Ottie (by Vivaldi) and Inter I horse Ursus (by Metall) are also coming out of this damline.

This is just a selection out of the full collection of the fourth KWPN Online Foal Auction.

View the whole collection including photos and videos on the auction website, pick your favorite and register as a bidder for free, to make sure you can participate in the biddings right away. During the photo and video days, all of these foals were inspected by a vet and assessed by a KWPN-inspector.

Information on these reviews can be requested by Rianka Hazeleger through salespromotion@kwpn.nl or by phone: +31 341 255 511.