Lena Sellman: "Hail to the Breeders at the FEI/WBFSH World Breeding Championships for Young Dressage Horses?" 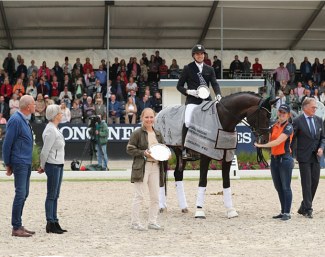 Guest columnist of this week is Swedish Lena Sellman, the managing editor at the Swedish equestrian magazine Ridsport. Ridsport is focusing on sport and breeding. This column was first published on www.tidningenridsport.se

Hail to the Breeders?

Since 1992,  the FEI in collaboration with the World Breeding Federation for Sport Horses (WBFSH) has annually organized the World Breeding Championships for Young Horses in dressage, show jumping and eventing. This competition determines which breeding association has produced the finest of young horses but it can be essentially narrowed down to which breed society that has the world's best breeders.

Therefore, I find it offensive that the organizer of the 2019 World Championships in Ermelo did not honour the breeders of the winning horses by acknowledging what they deserve. The breeders could at least have been called from the public stand to attend the prize giving ceremony. It must have been (or was) embarrassing when some breeders took matters in their own hands and frankly marched down into the arena, up to the prominent judges and award winners, to attend the prize ceremony for their own bred horse and more or less, demanded inclusion into the ceremony with their unwelcomed presence.

Rightly so. If it was not for the breeders these Championships wouldn't take place. They are the very persons who carefully selected stallions and mares and produced offspring with the genetics and talent to compete at the World Championship. Without them, there would be no show, no competition. They are the breeding association by definition.

I met the breeders of Revolution, last year's World Champion 5-year old and this year's silver medal winner. The sisters Yasemin and Sarah Yanik (hand on heart, how many people knew that they bred Revolution? None of the breeders are mentioned on the website of Helgstrand Dressage) and the Ten Bosch couple, the breeders of Jovian, who became the World Champion of the 5-year olds, both testified how they felt reduced and ignored at the Championships. By the way, the ten Bosch also bred  Astrix, whom became World Champion as a 5-year-old and a 6-year-old back in 2010 and 2011. Astrix and Jovian are from the same dam line since the dams are sisters.

The Yanik sisters had to buy their own tickets to the championship with seats in the public stands. At least their breed society (Westfalen Verband) had shown interest by calling ahead to ask if they were going to be present at the championship, but there  was silence from the organizer. The Ten Bosch family received a couple of free tickets from KWPN, but there was no request - or wish - from the organizer for any member of the family to attend the award ceremony in case their medal hopeful Jovian would win.

The breeders took matters into their own hands and they all went into the arena anyway, the Yanik sisters and Mr and Mrs Ten Bosch. But they had to return nearly empty-handed and uncelebrated with just a small, framed diploma in their hands. During the ceremony they had to stand to the side and look at how the riders and owners got fancy flower bouquets and shiny engraved silver plates and, of course, the prize money. Shameful if you ask me. At least Andreas Helgstrand had the decency and good taste to hand the Yanik sisters his flowers now, when the organizer had failed to think of this.

Christina Olsson, breeder and owner of Astoria (and chairman of the Swedish Stallion licensing committee) was not allowed into the arena after Astoria won the consolation final, unless she attended as the groom. Olsson was told that only the grooms were allowed at the prize giving ceremony, together with the horse and rider. So she took over the lead rope from Hogberg's groom and walked into the arena holding Astoria.

On my way out of the arena at the end of the championship, I met WBFSH President Jan Pedersen. He said that the choreography of the award ceremony was the organizer's responsibility. He was a little baffled by my question whether the breeders of the participating horses should not be given a bit more space and attention during a World Young Horse Championship, run by WBFSH (in collaboration with FEI). He just could not really see how it could be done. I suggested an invitation to all breeders with a horse entered in the championship with free tickets and some instructions on how to take a more active and prominent role in a possible prize giving ceremony. And could they, please, at least be given a flower bouquet if their horse wins a medal? Not just a framed diploma.

Jan Pedersen at least agreed with my suggestion of a bouquet and promised to have a talk with the next year´s organizers in Verden, Germany, about such an arrangement. Time will tell. But it is definitely time to give credit where credit's is due during a breeding championship.