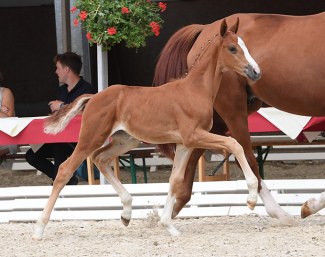 This is your final chance to place a bid on the stunning foals and young show jumpers in Paul Schockemöhle's 8th online auction, which closes this evening on 28 August 2019.

The auction lot comprises 15 outstanding foals, all descendant from the top sires of the Schockemöhle and Helgstrand stallion station, such as 2010 World Champion Totilas, Nurnberger Burgpokal winner Vitalis, and many exciting young sires such as Dante's Junior and Sezuan's Donnerhall.

All important information about the offers of the 8th online auction can be found on the website https://ps-online.auction/

Auction Foal in the Spotlight: Suntastic

Sire Sezuan's Donnerhall won both his 14-day test in Neustadt/D. (with 9.34) as well as his 50-day test in Schlieckau (with 9,19). The judges gave the perfect score of 10.0 for his canter, and 9.5 for rideability, willingness to perform and overall impression.

The dam Fantastic has already produced Robbie Williams, who competed at M** level, and Royal Gold (both by Royal Classic), who was placed at the Hanoverian Riding Horse Championships in 2017.

The full sister of the dam, Fräulein Wolke, was awarded state premium and produced with Sir Heinrich a licensed stallion in Verden in 2018.

The half-brother of the grand-dam Freestyle (by Frappant) is a licensed stallion in the USA.

Hanoverian dam line of the Sukkade from which descends, among others, Andretti H, 2007 German Champion with Hubertus Schmidt, participant in the European Championships for Italy in 2007, and internationally successful with Laura Tomlinson/GBR.

San Amour was 2nd Reserve Champion of the Oldenburg licensing in 2006 and, in 2008, he was awarded the Oldenburg main premium and won the dressage stallion performance test (with 9.0 for rideability). In 2009 he was placed in the final of the German Championships. His offspring are internationally successful, for example, West Side Story competed in the Swiss team with Isabell Wettstein at the World Equestrian Games in Tryon/USA.

The grand-dam Alizee has produced the mare Avantina (by Fidertanz), who is the dam of the stallion Fandorin (by For Romance I), who was licensed in Vechta in 2018.

Discover the complete collection and bid online at https://ps-online.auction/