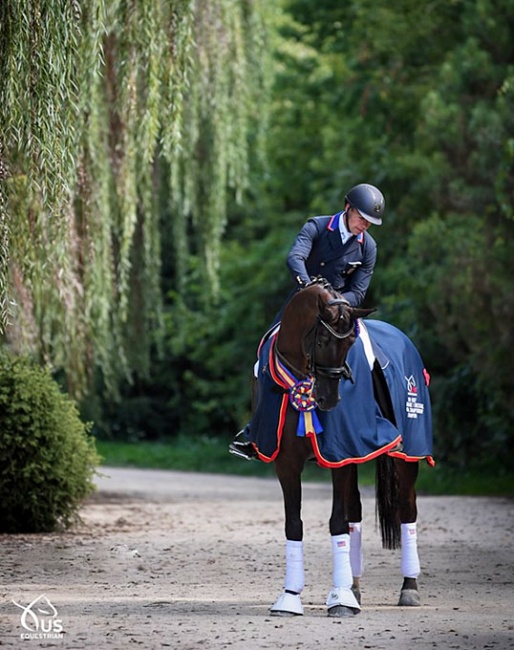 Endel Ots (Wellington, Fla.) and Lucky Strike added to their successful week with a great Freestyle performance to earn the Intermediaire I Dressage National Championship. He and the nine-year-old Hanoverian gelding owned by Max Ots earned a Freestyle score of 74.810 percent for an overall score of 74.255 percent.

“This is a great way to end a year. It means a lot. My dad lives nearby, and to have him be here and see it, it has been a wonderful journey. To come here for [the young horses] and the development [classes], it has been wonderful and a dream come true,” said Ots, who won the 2018 U.S. Developing Prix St. Georges Horse Championship. “It was a good ride; I was trying to do everything nice, clean, and easy … I was very happy with him through the ride, since he had two weeks off, just slowly bringing him back with basic movements, so I was very happy with his performance today.”

Rebecca Rigdon and La Fariah, the 10-year-old Rhinelander mare she owns with David Blake, earned the reserve national championship with an overall score of 71.476 percent.

“It’s absolutely fantastic coming here as a wild card [returning] from an injury after the first qualifier for the Pan [American Games] team," said Rigdon. "[It] was really hard, and I felt [we] were done for the year, so to be able to have the opportunity, I’m grateful to USEF. It’s pretty spectacular. I could not be happier with her. She has grown up considerably over the past couple of years, and she’s ready to move on from small tour.”

“It’s such an honor," said Hassler. "He’s only a year and a half back from an injury, so just his victory in getting here is huge, and it’s such an honor to have a horse like that to learn from, and ride, and to allow me to be riding around such incredible people is very inspiring every day. It’s just inspiring to get here. I honestly did not expect to come here and have this happen. I’m so grateful to his owner for giving me this opportunity. It’s a once in a lifetime experience for me.”

Nick Wagman (San Diego, Calif.) and Don John captured the US Grand Prix Championship. He and the 11-year-old KWPN gelding owned by Beverly Gepfer earned a 76.140 in the Grand Prix Freestyle for overall score of 73.287 percent, after leading in the Grand Prix and Special.

“What a way to end the season. It's really exciting. Last year was our first real season of Grand Prix, so a year later we're more confirmed, stronger, and more settled in the test. We went to Europe, and that did a lot for our confidence as well, so I think it's all just starting to show in the ring here, which is great,” said Wagman, who was the 2018 USEF Grand Prix Dressage Reserve Champion with Don John.

The 2019 edition of the U.S. Grand Prix Championships was lucklustre, again just like in 2018, with the majority of America's top Grand Prix combinations choosing not to show at their National Championships. Only Wagman made the trip of all elite "A-team" combinations. Just four combinations (!) competed in the Grand Prix division this year!

“I've always wanted to show here. It's been a goal of mine to compete at the Festival Of Champions," said Marek. "Claire is such a good girl, … so it was a big deal to qualify [two] horses to be able to come here, especially at Grand Prix with Clair because I've been with her for a very long time, known her for a long time, and she always just tries hard. She always exceeds our expectations.”

"“It's always such an honor to be here at this show. Every year that I can bring a horse along and make it again is very wonderful, and I enjoy it very much. So hopefully we'll be back again next year," said Schrader-Williams.

As part of the winning honors, Wagman was presented with the United States Equestrian Team Foundation (USET) Grand Prix Trophy presented to the USET by Franklin Mint in 1978. In addition he was awarded The Patsy Albers Award. This award is presented to the highest placed rider in the Grand Prix division who represented the U.S. at the North American Junior and Young Rider Championships. The award provides financial support for continuing education and training.