Team The Netherlands in the Lead at 2019 European Pony Championships 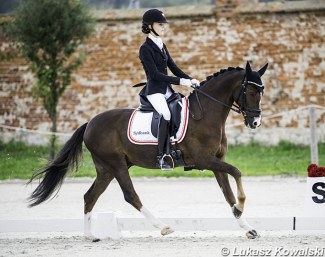 Danish Liva Addy Guldager Nielsen has taken an early lead in the Team Championship on the opening day of competition at the 2019 European Pony Championships in Strzegom, Poland, Wednesday 14 August 2019, but it is The Netherlands that stand in a provisional first place in the team ranking.

The 2019 European Pony Championships kicked off on Tuesday 13 August with the pony inspection and measurement, following by an opening ceremony in the main arena where all nations were presented waving their flags.

The dressage competition started today with the first group of riders in the Team Championship Test, which will determine the team medals. The second group is to ride on Thursday. Officiating as ground jury are Tissot (FRA), Ebert (GER), Graham (GBR), Tornblad (DEN), and Hillier (HUN).

Taking the performances of the Danish riders at the spring CDI's in Europe into consideration, Team Denmark is the favourite for team gold. This is unusual as year after year Germany holds a subscription to team gold, with only the Brits breaking through that golden chain in 2015. This year Denmark is super strong and today Danish Liva Addy Guldager proved that by posting the highest day score in the Team Championship Test. Aboard her 13-year old gelding D'Artagnan (by FS Don't Worry x Colano) she scored 76.029 % for the provisional lead.

However it is surprising Team The Netherlands that have taken the best start and are currently leading in the team ranking. Team new comer Floor van der Kuijl produced a very strong ride on her 12-year old mare Champ of Daily (by FS Don't Worry x Scapino BB ox), which earned her 75.171%, and landed a provisional second place. Team mate Robin Heiden and the 8-year old Colourfull Cannonball (by Can Dance) followed ride in their wake with a third place and 74.971%, which put Holland firmly in the lead on 150.142 points.

Denmark is currently standing second on 148.886 points. The second Danish contributing mark came from Thilde Rude Hare on the 10-year old Morgensterns Dakar (by FS Don't Worry). Her 72.857% and fifth place combined with Guldager Nielsen's mark has put Denmark on a silver run at the moment.

Germany is surprisingly following in third place, quite behind the leading twosome, on 141.357 points. Germany's top score of the day came from Antonia Busch-Kuffner on the 8-year old stallion Daily Pleasure (by HB Daylight x Dressman). She landed fourth place with 74.286%. Team Germany's best pony, Daddy Moon, is ridden by the team's youngster and least experienced rider, the 11-year old Rose Oatley. In her first European Championship, Rose struggled to keep her pony in front of the aids and there were issues in the rein back and simple change which pushed the score down to 67.071% and a provisional 16th place.

The British team is currently standing fourth with 140.714 points. Isobel Lickley and Mister Snowman rode the best score for the team today, 71.314% and a seventh place so far.