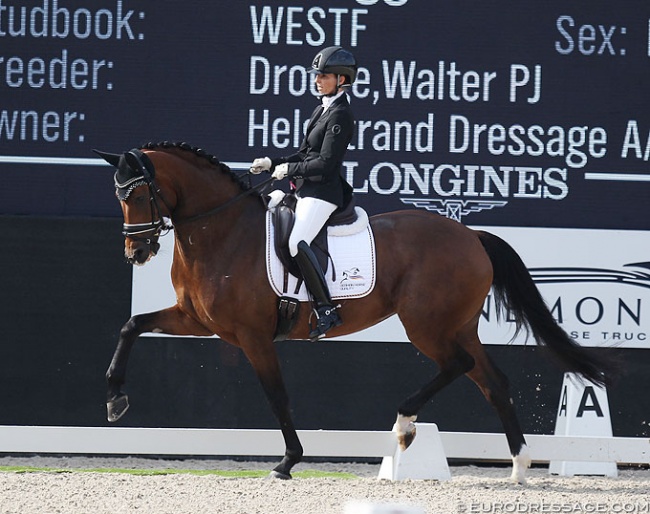 Eva Möller and the Westfalian mare Espe became the winners of the 5-year old consolation finals at the 2019 World Young Horse Championships in Ermelo, The Netherlands, on 2 August 2019.

The top three of the consolation finals assured themselves of a place in the final.

In the consolation class the horses were judged by four members of the jury, Maria Schwennesen and Adriaan Hamoen at C, and two new colleagues at E: Marietta Almasy and Juan Campos.

Adriaan Hamoen: “The top 3 of today is a great addition to the final on Saturday. These combinations clearly improved compared to their first test. The horses already showed a lot of quality yesterday, but today the riders could perform their test as they wanted to. The talent of these five-year-olds already caught our eye in the qualification, but the tension suppressed the score for submission. We may conclude that we have a great group of horses in the final and these three certainly have the chance to rise further in the rankings.

Ridden by Eva Möller, the Westfalian mare Espe (by Escolar x Dimaggio) danced to the win in the small final. The pair obtained a first place in the Bundeschampionate qualification in Hagen in June and today they secured a place in the World Championhsips final on Saturday. The consistent grade list – trot 8.7, walk 8.5, canter 8.9, submission 8.6 and perspective 8.9 – totaled a winning 8.72 points.

Renate van Uytert- Van Vliet and her KWPN-stallion Just Wimphof (by De Niro x Riccione) placed second, scoring 9 for trot, 8.8 for perspective and 8.5 for walk, canter and submission. The bay stallion shows a lot of talent for collection and the 8.66 average got him a ticket to the final.

The last spot in the final was claimed by Quiana W (Quaterstern x Rubinstern Noir), who also scored 8.66 with Nicole Wego. The light-footed mare received a 9.2 for the walk, an 8.8 for the trot and perspective, an 8.5 for the canter and an 8.0 for the submission.

Hamoen: “Eva Möller and Espe showed us a lovely ride. Consistent and a balanced trot. This mare was more independent of the rider’s hand today, which tremendously improved the overall frame. This was also the case for numbers two and three. Today, everything turned out well for Renate van Uytert – Van Vliet and Just Wimphof, a horse that has so much quality in all three gaits. They truly deserve to be in the final. The sensitive Quiana of Nicole Wego was also much more relaxed today. Maybe it had something to do with the location of the ring, the small final was ridden in the second arena.”