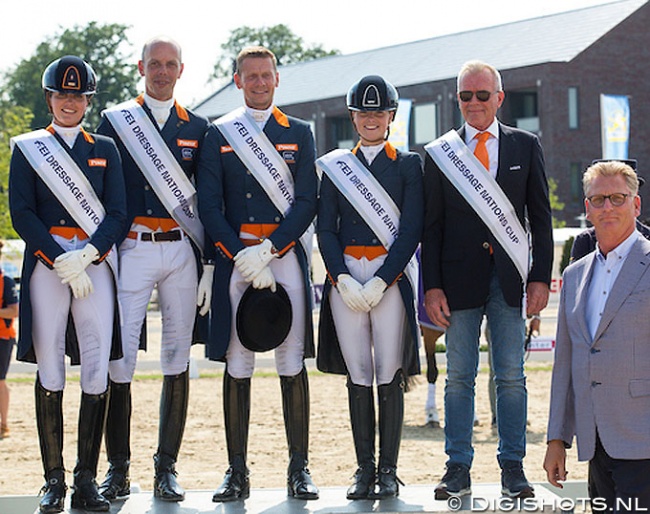 Geesteren was a new venue on the 2019 FEI calendar, substituting for the CDIO Rotterdam which dropped its CDIO edition to prepare itself for the 2019 European Dressage Championships in August.

Edward Gal spearheaded the Dutch effort aboard Gaston Glock's 11-year old Danish warmblood stallion Zonik (by Zack x Romanov). They won the Grand Prix with 78.304% although his scores went from 76.304% (Colliander FIN) to 80.109% (Verbeek NED). The pair went on to win the Kur to Music with 82.250%, keeping all judges more in unison with their marks. Emmelie Scholtens and Ad Valk's 11-year old KWPN stallion Desperado (by Vivaldi x Havidoff) were Holland's second best performing pair in Geesteren with 75.913% in the Grand Prix (4th) and 76.170% in the Special (2nd). Desperado has now eclipsed stable mate and Dutch WEG Team horse Apache as Scholtens' number one choice for the team.

"I'm very happy with this result," said Dutch team trainer Alex van Silfhout after the Dutch victory in the Nations Cup. "We have beaten Sweden, who have a group of very good horses, horses with a lot of potential. We delivered a strong team and what makes me even more happy is that there is still more in the tank. We'll make a good plan towards Aachen and the Europeans. "Internationally we are building on the road up again, I'm looking forward with confidence to the European Championships."

Team Sweden placed second in the Geesteren Nations' Cup with Juliette Ramel and her 13-year old Dutch warmblood gelding Buriel KH (by Osmium x Krack C) as anchor. They were second in the Grand Prix with a personal best score of 78.000%, having team mate Therese Nilshagen on Lodbergen's 12-year old Oldenburg stallion Dante Weltino (by Danone x Welt Hit II) in her wake in third place on 77.729%. Ramel won the Special with another personal best of 79.915%, while Nilshagen was second in the Kur with 81.495%.

"I am very pleased with the team's efforts," said Swedish team captain Bo Jenå. "The riders perform at the highest level and delivered personal best scores. Unfortunately we did not win, but there were good combinations, and it's a good promise for the future."

Team Great Britain, who won the second leg in Compiègne (FRA) in May, landed third place in Geesteren. The  team rookie Charlotte Fry, who won the 2018 European Under 25 Championships in Exloo last year, became the best scorer on Van Olst Horses' 11-year old KWPN gelding Dark Legend (by Zucchero x Tango). They placed fifth with 74.413% in the Grand Prix  and fifth with 72.489% in the Special. Best Brit in the freestyle was Louise Bell on the 13-year old AES registered Into the Blue (by Ublesco x Calvaro Z) with a sixth place on 73.620%.

Team U.S.A., the winners of the first leg in Wellington, Florida, dropped the fourth place in Geesteren. Under the guidance of team trainer Debbie McDonald, Shelly Francis, Ashley Holzer, Charlotte Jorst, and Nick Wagman concluded their time in Geesteren with a team score of 61 points. Shelly Francis (Loxahatchee, Fla.) and Danilo, Patricia Stempel’s 15-year-old Hanoverian gelding, had a conservative start to the competition earning a 68.043% in the Grand Prix.  In their Freestyle, Francis and Danilo were the first combination of the day to crack 80.00% for their artistry but had an uncharacteristic mistake in their tempi changes. The dancing duo finished with a final score 75.710%, fourth place in the CDIO Freestyle class. Charlotte Jorst and her 16-year old Dutch stallion Nintendo (by Negro x Monaco) produced two solid rounds for 71.717% in the Grand Prix and 71.468% in the Special.

“The Geesteren CDIO proved to be a learning experience for us,” said Chef d’Equipe Debbie McDonald. “We didn’t all have our best performances this week. However, we had some positive highlights throughout the team competition. We are looking forward to continuing to use future years of the FEI Nations Cup series as a means of building up our combinations in team environments.”