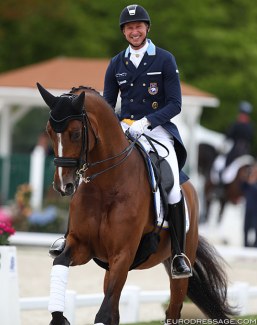 Swedish Patrik Kittel and the Swiss bred and owned Well Done de la Roche CMF won the 5* Grand Prix at the 2019 CDIO Compiègne on Saturday 19 May 2019. The CDIO 5* class was the first part of a three part Nations Cup competition in which Great Britain took the lead after the Grand Prix.

Patrik Kittel and the 11-year old Swiss warmblood mare Well Done de la Roche (by Furstentraum x Walt Disney) topped the board in a field of no less than 31 riders. Judges Halsall, Judet, Sanders, Hoevenaars and Maknami favoured the pair and rewarded them scores between 75.652% and 78.587% to average 77.283% for the victory. Well Done de la Roche, who is co-owned by breeder Françoise Trembley in partnership with Brigitte Bigar and Muriel Perret, is a hyper talented, graceful mover but tension often gets in the way of her to swing and functionally use her back. In Compiègne the mare was more at ease in the competition ring than three weeks ago in Hagen, which resulted in highly expressive and more flowing piaffe-passage work. The trot half passes are always very appealing. In the two twempi changes she needed to be straighter, but the ones were nice. Unfortunately the extensions in walk and trot are her weak point as she does not achieve any overstep and lengthening of the frame, yet remarkably still scores between 6.5 and 7.5 for them. The collected work is no problem for her, though, and in the pirouettes the horse truly takes the weight on the hindquarters.

Carl Hester and the 11-year old Hanoverian gelding Hawtins Delicato (by Diamond Hit) made their big come back to the arena since their last start at the 2018 World Equestrian Games in Tryon. Delicato was Charlotte Dujardin's catch ride at the 2018 CDI-W London Olympia Horse show in December, but Carl did his first CDI on the dark bay gelding in eight months. The pair was visibly ring rusty and although Carl kept a very steady, quiet contact with the bit, the horse was fidgety in the mouth and on occasion showed tongue on the right side. The gelding was not immobile in the halt at entry. He showed smooth half passes but there was a break in the rhythm in the second extended trot. The first piaffe was very nicely on the spot. The horse had two hooves overstep in the extended walk, but in the collected he became lateral. In the second piaffe Delicato was a bit hesitant in finding the rhythm.  The one tempi changes were outstanding, the left pirouette a bit flat, the right one much better. The judges rewarded this test with 76.348%. The Germans skipped the CDIO Compiègne altogether and only Helen Langehanenberg came down south as an individual. She brought three horses, small tour horse Frank Sinatra, her rising Grand Prix horse Hollywood as well as her top ride Damsey, Louise Leatherdale's 17-year old Hanoverian stallion by Dressage Royal x Ritual. The halt was square, the half passes had much ground cover and the first piaffe-passage was nice and even. The stallion has a superb extended walk. The second passage was slightly uneven and the piaffe needed more impulsion. Overall the passage work was less collected today, which made the horse more regular and less jerky but also slightly less active. There was a miscommunication in the canter strike off. In the two tempi's the changes to the right appeared shorter behind and the ones were correct but needed to be more forward as the rider's hand was working backwards and held him in this movement.  The pirouettes were lovely and the trot extensions powerful and engaged. They finished third on 75.957%.

Dutch Emmelie Scholtens and Ad Valk's 11-year old KWPN stallion Desperado (by Vivaldi x Havidoff) landed a fourth place with a personal best score of 74.804% from the benevolent judges. The black stallion has matured much and is a powerful mover, but in the self-carriage he still needs to improve. While the horse is impressive in the straight work: strong lengthenings, very uphill tempi changes, in the lateral work the hindquarters still lag behind (trot half passes) or swing out (zig zag). Their Grand prix ride was full of promise but needed a bit more polish in the execution. He sometimes gets a bit wide behind in piaffe and in passage the push from behind can be better, but he is regular and willing.

Probably the nicest, classical dressage ride of the day came from Gareth Hughes on the 13-year old Dutch warmblood mare Briolinca (by Trento B x Royal Dance). The trot extensions were  beautiful without being flashy, the half passes smooth. The first piaffe-passage was lovely with the piaffe really being on the spot. Overall the balance could be even better if she climbed a bit more up in front. The extended walk was the weakest movement of the test, with barely any overtrack. Also in the collected the rhythm was not ideal. The second passage was superb with excellent rhythm and suspension. The extended canter was lovely, the zig zag well ridden but could have been more uphill oriented. The one tempi changes were nice and straight, but after the pirouette left she threw in a few extra flying changes. Overall the horse can be a bit more up in the poll for an even more expressive overall look, but all appeared soft, easy and correct. A delight to watch. They scored 74.696% for fifth place.

The Nations Cup in Compiegne concludes on Sunday with the CDIO 5* Grand Prix Special and Freestyle.

Text and Photos © Astrid Appels - NO REPRODUCTION ALLOWED
Eurodressage took photos of pretty much all riders in Compiègne. If you are interested in our photos for your social media, contact us for permission and our conditions for republication