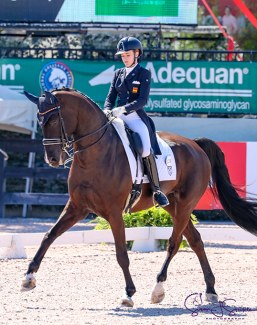 The 2019 FIYDC featured competition for riders in the Under 25, Young Rider, Junior Rider, Children and Pony divisions, offering them a chance to compete on the big stage in the Global International Arena and showcase their talent at one of the world’s largest and most high-profile dressage competitions.

This year there were 13 horse and rider pairs in the U25 division, 11 entries in the Young Rider division, six in the FI Junior Rider Division, one in the Children division, and three in the Pony Rider division. The riders represented four countries, including Canada, Germany, Spain, and the United States.

Bacariza won the overall champion title at FIYDC for the second year in a row, after winning all six of the classes that she competed in with her two different mounts. “They are completely different,” said Bacariza of her two horses. “Dhannie is more with you and he loves being the center of attention. When he goes in the ring he’s like ‘I’m a star’.

“I’m not as confident with Romantico yet because this is my first year competing him, and he hasn’t done CDI before,” continued Bacariza. “It’s a learning process together, but I’m super happy with how it’s going. I’m so happy with the way it turned out. To have the highest overall mark, I was also very, very happy.”

Pai Climbs to the Top in U25 Division

Natalie Pai (USA), a 21-year-old from Wellington, FL, and Unlimited won the Under 25 division, presented by Diamante Farms. The pair earned a score of 68.590% in the Short Grand Prix on Friday morning and a 71.208% in the Grand Prix Freestyle on Sunday.

“I’ve had him [Unlimited] for two years now, and this is my third year doing the U25 youth championships. We’ve come such a long way,” said Pai of her partnership with the 18-year-old KWPN gelding by Jazz x Clairudith owned by Melanie Pai. “It’s always a fun thing to come here and do the championships, and to be able to win is awesome. This was a long week and for him to come out there every single day and just give me everything, that’s amazing. Especially on the very last day when it was really hot, that was great. I’m really proud of him.”

Hansen and Boyer Get the Blue Ribbon

“We both enjoy showing. He’s very sweet and very strong,” said Boyer of the 18-year-old P.R.E stallion owned by Hampton Green Farm. “My strongest test was today because it was better than yesterday, and we got more forward. Long term I hope to work up to the juniors.”

“My relationship with my pony is really strong. We love to play together, and he loves treats because he is a pony,” said Hansen of her 14-year-old German Riding Pony by Viersen K. “My pony was born at home, and I trained him myself, so I’m really proud of him. I think we did really good, and I’m really happy.”