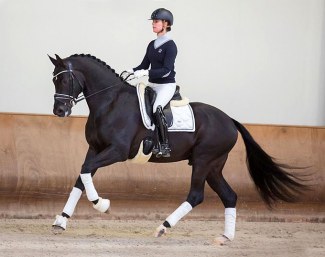 The black is bred by Jens Röbken and is by Millennium out of Serenade (by Sir Donnerhall x Furst Heinrich). He was originally owned by Heinrich Ramsbrock, but now sold to Dutchman Wiepke van de Lageweg.

Milford became a premium stallion at the 2017 Brandenburg Stallion Licensing and is also NRPS approved.  He did his stallion performance test in Schlieckau November 2018 and scored 8.35 for dressage.

The stallion arrived at Cornelissen's yard in Nijkerk, The Netherlands, a month ago.

"Milford is a real beauty," Adelinde told Eurodressage. "He's a lovely horse to ride with his lightfootedness and elasticity in his movements.. And very eager to learn."

Because of his young age, Adelinde has no heavy show plans with the colt just yet. "At the beginning of the year he'll do a few stallion shows and then we'll train quietly and look at a schedule. He's only four. Maybe Pavo Cup," said Adelinde.