Despacito, Destacado, Dostojewski, Finnigan and So Unique Get 2019 Weltmeyer Prize 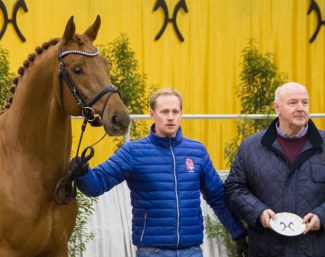 Hanover's best young stallions are annually awarded with the Weltmeyer Prizes. For 2019, the Weltmeyer-Prize goes to the dressage stallions Despacito, Destacado, Dostojewski, Finnigan and So Unique.

The breeders of the first three stallions were honoured at the show of the privately owned stallions in Verden. Finnigan and So Unique could not come to Verden, their breeders will receive the award at a later date.

For this first time no less than five stallions were recipients of the Weltmeyer Prize. In the past it was only one colt per year, but since the renaming of the award into Weltmeyer Prize, multiple stallions became winners of it per year. Three has been the maximum so far, but this year there are five!

Despacito (by Don Nobless x Sandro Hit Despacito - breeder: Josef and Karl-Heinz Rudde, Ahaus, owner: Stallion station Ingo Pape, Hemmoor) was celebrated in Verden last year as Hanoverian Champion of the three-year-old stallions and returned from Warendorf as Vice Bundeschampion. At his 50-day test in Schlieckau, the black stallion was the best Hanoverian with the final score of 8.56.

Hardly behind was the one year older Dostojewski (by De Niro x Latimer - breeder and owner: Burkhard Wahler, Klosterhof Medingen), who was close to Despacito‘s topresult with the final score of 8.55.

Destacado (by Desperados x Londonderry) is already six years old and has already achieved international merits (breeder: Heinrich Gießelmann, Barver, owner: Gestüt Schafhof, Kronberg/Ts.). As a premium stallion the strong moving chestnut left the Verden stallion licensing in 2015, became Bundeschampion in Warendorf one year later and continued his success series impressively with the title of Vice World Champion of the five-year-old dressage horses. In Ermelo/NED Matthias Alexander Rath sat in Destacado's saddle. Three months ago, the stallion has already received a very special award in the Niedersachsenhalle: He got the addition "FRH" of the Hannoveraner Förderverein for his sport name.

Finnigan (by Floriscount x Don Schufro - breeder: Cordula Mohr, Wismar) comes from the State Stud Celle. The 2013 born liver chestnut convinced with his qualities at the sport tests in Verden (part I) and Munich-Riem (part II). With very good marks in all criterias he belonged to the best of his year. Already in the first years of his breeding he enjoys great popularity among breeders.

A real winner type is the Rhinelander So Unique (by Sezuan x Donnerhall - breeder: Wilhelm Klausing, Diepholz, owner: Helgstrand Dressage, Vodskov/DEN). As a premium stallion out of one of the best Hanoverian dam lines, he was the most sought-after representative of the 2015 vintage at the stallion sales in Verden. In Warendorf, he became the superior Bundeschampion before winning the 35-day test in Denmark.