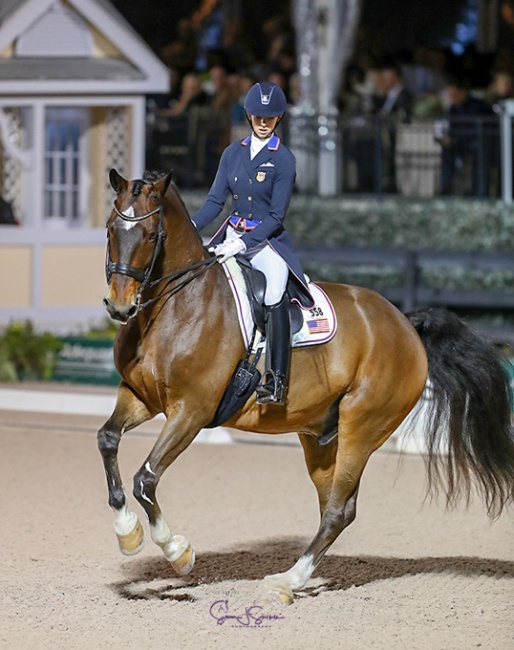 U.S. dressage stars and currently ranked number two in the world, Laura Graves (USA) and Verdades performed a beautiful test and earned a score of 84.935% to win the Grand Prix Freestyle CDI-W, presented by the U.S. P.R.E. Association on Friday, January 25, at the Global Dressage Festival (AGDF) in Wellington, FL.

“This freestyle was nice. This was the second time I’ve ridden to this music. I’m definitely feeling a little more comfortable with it,” commented Graves, who has captured medals at the Olympic Games and World Equestrian Games with Verdades, her 17-year-old Dutch Warmblood gelding by Florett AS. “I’m glad to add another good score to qualifying [for the World Cup Finals]. In a normal year we’d be qualified by now, but we have one more show to do so we’ll be back at the end of February, I believe, to hopefully qualify.”

Kasey Perry-Glass (USA) and Goerklintgaards Dublet, a 16-year-old Danish Warmblood gelding by Diamond Hit owned by Diane Perry, came in second with a score of 82.425%.

“The weather was great for Dublet. He loves the cold weather, said Perry-Glass of her 2018 FEI World Equestrian Games Tryon (WEG) team silver medal-winning partner. “It really gets him a little bit more amped. I’m just very proud of him for this show, to come out and score a personal best in [yesterday’s] grand prix out of WEG. Unfortunately, I had a little bit of a spook coming in [the freestyle], so that kind of put me a little behind my music. I felt a little rushed throughout my choreography, but he nailed everything.”

Shelly Francis and Danilo (USA), a 15-year-old Hanoverian gelding by De Niro x Annabella owned by Patricia Stempel, earned a score of 80.535% and came in third place in the freestyle.

“I just feel like my horse is really kind of liking this freestyle,” commented Francis about Danilo. “He kind of gets a little pumped up tonight with the cooler weather. It was good. He felt really fun and awesome though; he was just trying to do everything. The piaffe and passage and pirouettes are always getting better, and he’s always been pretty good about the changes. He’s kind of coming into himself.”

Judge at C Michael Osinski, pointed out – and it was confirmed – that for the first time in a dressage competition in the U.S., the top three earned above 80%. Osinski commented, “It just was an honor to watch all three of you, such elegant, harmonious, beautiful riders. It was just great, and I wish them all the best.”

AGDF Director of Sport Thomas Baur also pointed out that Adrienne Lyle (USA) and Tinne Vilhelmson Silfven (SWE) placed fourth and fifth with top scores above and near 79%.

“I think that we did not have many qualifiers in the Western European league this year or last year, that were that strong,” he noted. “I think we have come a long way here, and it’s pretty amazing.”

“It’s been a really exciting week for us,” said Jane Bistline of the U.S. P.R.E. Association. “We had the U.S. P.R.E. event on Wednesday night, where everyone brought their Spanish horses and we really had a nice time. We’re just really honored to have you here in America,” she said to the top three riders."

Earlier on Friday, Jennifer Baumert (USA) and Handsome, a 14-year-old Hanoverian gelding by Hochadel owned by Betsy Juliano LLC, won the FEI Intermediate I CDI3*. The pair earned a score of 73.676%.

In the Grand Prix Special CDI3* Katherine Bateson Chandler (USA) and Alcazar, a 14-year-old KWPN gelding by Cantango owned by Jane Forbes Clark, won with a score of 72.319%. The combination has been away from the competition arena for 10 months and came back on Thursday with their first ride in the 3* Grand Prix.