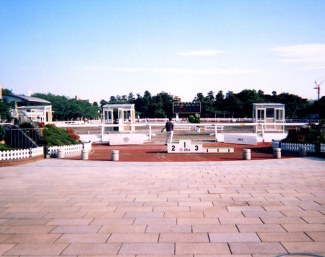 The organizers of the Tokyo 2020 Olympic Games have struck a deal with Japanese Racing Association and signed up JRA as an official contributor. The JRA will lend its Equestrian Park "Baji Kouen" for the Olympic equestrian competitions.

Official contributor is a different status to the Tokyo 2020 sponsorship programme for non-profit organisations which are contributing to the Games.

In addition to lending the Park to the Games, JRA will help renovate the facility and provide financial support for work.

"JRA will refurbish and maintain the Equestrian Park, the venue for equestrian events at the Tokyo 2020 Games, and furnish financial support for overlay construction being carried out by Tokyo 2020," said Tokyo 2020 President Yoshiro Mori. "In addition, we really appreciate the fact that this will provide huge support for the operation of equestrian events, including the deployment of veterinarians during the Games."

The Baji Kouen Equestrian Park, owned by the Japan Racing Association, hosted the equestrian events of the 1964 Olympic Games in Tokyo.

"After a half century passed, with us once again hosting Olympic events in the Equestrian Park, we are proud to cooperate in the smooth operation of the Games through overall renovation of the facilities and financial support for the overlay facilities, and through our many years' experience and knowledge about horses," said Masayuki Goto, President and chief executive of the JRA.  "Moreover, through these efforts, we will endeavour to create an important legacy that will continue to benefit the development of equestrian sports and equine culture long after the Tokyo 2020 Games."

Source: Inside the Games