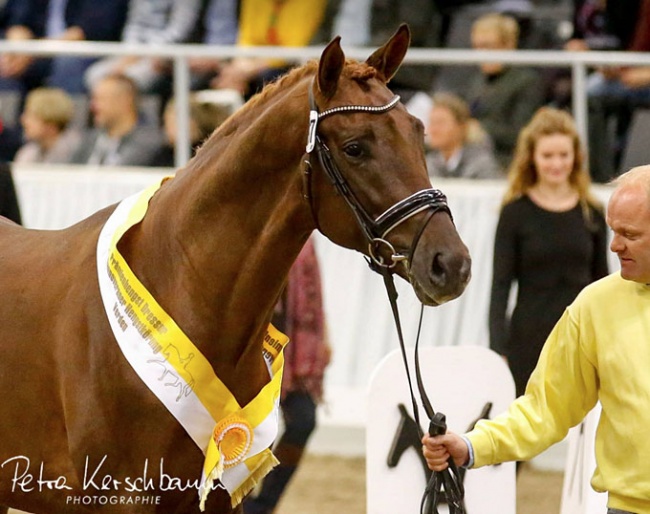 The previous licensing auction record was 1.2 million euro which Helgstrand paid for Revolution three years ago. The most expensive horse ever sold at a warmblood auction, whoever,  is still set by SPH Dante, which sold to Russia at the 2014 PSI Auction for 2.8 million euro.

The auction following the Hanoverian licensing was a massive success.

Helgstrand bid against Norwegian millionaire Kristin Andresen who went all the way to 2 million euro for Vivino (by Vivaldi x Dancier). The already 1.73 m standing liver chestnut is bred by Ulrike Buurman and was owned by Ernst Kemper.

Andresen ended up buying two other premium licensed colts: Duke (by Dimaggio x Sir Donnerhall) for 570.000 euro and the Dancier x  Wolkenstein II for 120,000 euro. The Dimaggio was also owned by Ernst Kemper, who had discovered the liver chestnut at his breeder Dieter Hilz.

The best selling show jumper was a colt by Kannan x Stolzenberg, bred and presented by Ulrich Heuer, Bienenbüttel. He sold for 150,000 euro to Irish Cian O'Connor. A premium colt by Embassy x Darco fetched 135,000 euro.

The average price for a licensed colt at this auction was now atypically high as 2 million bid pushed up the average. A colt now cost 130,960 euro on average at this auction.

The unlicensed stallions also aroused a lot of interest. A bay colt by Le Vivaldi x Rotspon (breeder: Elizabeth Kapp, owner Heiko Klausing) sold for 54.000 euro to a Hanoverian breeder from the Lüneburger Heide. The average price of the 32 non-licensed colts was 18,758 euro.