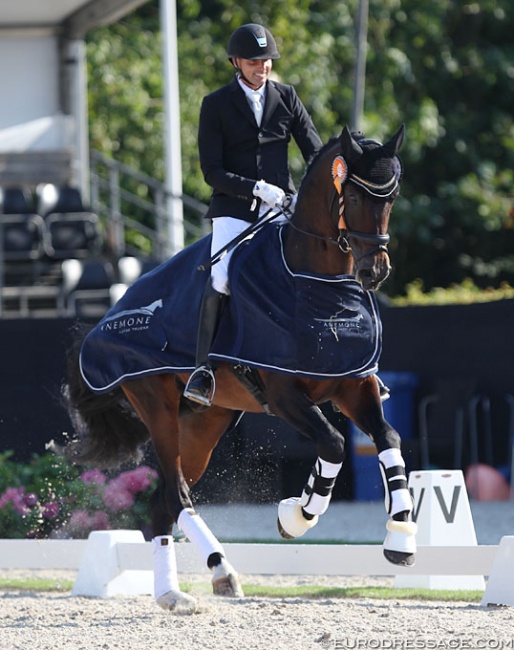 Andreas Helgstrand and Hanni Kasprzak's Westfalian stallion Revolution led the way in the preliminary test in a spectacular field of 5-year olds at the 2018 World Championships for Young Dressage Horses in Ermelo, The Netherlands, on Thursday 2 August 2018.

The first group of horses going on Thursday morning already featured four of the top 10 place-getters, so there was no speaking of a slow start. Dutch Emmelie Scholtens was the first starter with the KWPN licensed stallion Indian Rock (by Apache x Vivaldi) and she immediately set the bar high. The gorgeous dark bay stallion is naturally very uphill and up in the frame and has a brilliant canter. The trot work needs more balancing out and self carriage, but the judges panel - consisting of Ulrike Nivelle, Lars Andersson, Mariette Sanders and Maria Colliander - loved the guinea pig and rewarded it top scores. The KWPN performance test winner received 8.8 for trot, 8.3 for walk, 9.5 for canter, 8.9 for submission and 9.2 for general impression. With a total of 8.94 they ended up fifth in the ranking, but as first pair they showed that it was all business today!

With 11 horses qualified for the World Championships this year, Danish horse dealer and Grand Prix rider Andreas Helgstrand seems to be turning this global event into the "Helgstrand Young Horse Championships". The self made millionaire invests whopping amounts of money in horse stock by attracting wealthy investors to co-fund these young stars. Three years ago he and Hanni Toosbuy Kasprzak (of Ecco Shoes) acquired the Hanoverian licensed and Westfalian registered stallion Revolution (by Rocky Lee x Rouletto) sold at auction for an astronomical 1.2 million euro and the huge bay gelding has been a hit as a breeding stallion as well as young dressage horse in Denmark.

Ermelo is Revolution's first big, international outing and the bay stallion was visibly impressed by the atmosphere and stadium. He looked tense and sweaty (it was 32° C) and Helgstrand was managing him much in the mouth to steer him round as fault-free as possible. Revolution has "ginormous" gaits: in trot his hind legs circle like the blades of a windmill, in canter he makes huge, airy strides up into the sky and in walk he covers so much ground it's almost five hooves overtrack (while keeping the rhythm clear). There is no doubt that this stallion is spectacular, a type of horse that Helgstrand loves and looks for. In the preliminary test Revolution's trot was huge, but it could have been more steady and regular despite the big ground cover. The extended walk was gigantic. In canter the horse got tense, whinnied, spooked to the side, and almost lost the canter on the left lead but each stride was airborn and uphill.  Revolution scored 9.5 for trot, 8.8 for walk, and 9.0 for canter. He got a very generous 8.5 for submission taking the tension, spook and bridle contact into consideration. With 9.5 for general impression he totaled a winning 9.06 points.

Rath's more compact and slightly chunky looking Destacado is owned by Friederike Lohse in partnership with Matthias' step mom Ann Kathrin Linsenhof. The chestnut licensed stallion has a very sympathetic silhouette and stood out with his incredibly balance and cadence in his three basic gaits. The extended walk was exceptional. In canter the horse has incredible self carriage for his age, but overall he could stretch in the rib cage more in the lengthenings. This also showed in the trot when he was given the rein. The horse curled the neck instead of stretching it forward. The bridle contact could have been more elastic and there was clear resistance in the rein back which led to a reduced submission score. Destacado got 9.1 for trot, 9.8 for walk, 9.0 for canter, 7.9 for submission and 9.4 for general impression, which they also called "perspective".

Frederic Wandres and Star Horses' Zucchero were the last pair to go in the preliminary test and they benefit from that position. The black stallion has wonderful suspension in trot, with very good rhythm and ground cover in the lengthenings. The former PSI auction horse really engaged from behind. The extended walk had huge overtrack, but the clarity in rhythm could have been more pronounced. The canter showed big uphill strides, but in the trot with given rein the horse lost some balance. Overall Zucchero could have closed the mouth more and was slightly fidgety. He got 9.0 for trot, 9.7 for walk, 8.7 for canter and submission and 9.1 for general impression.

Andreas Helgstrand and the Danish warmblood bred Zhaplin Langholt (by Zonik x Stedinger) were the hot favourites for the first place in Ermelo. The black stallion is incredibly sporty, uphill and with good, constant engagement from behind. As one of the earlier starters in the day, the black gelding, which is owned by Helgstrand in partnership with Solyst Horse, topped the leader board for the majority of the day. The judges loved the trot and scored it the highest notes of the day with 9.8. The walk received an 8.0 and for canter the stunning horse got 9.7. With an 8.0 for submission and 9.5 for general impression, Zhaplin totaled 9.0 points and placed fourth.

One of the crowd favourites today was Eva Möller aboard Paul Wendeln's Oldenburg mare Candy (by Sir Donnerhall x Furst Heinrich). The incredibly elegant and feminine looking mare is such a graceful mover in trot, but she was constantly ridden over tempi in medium or extended trot. One wished to have seen a bit more tendency towards collection, so the horse could stayed more in self carriage and steadier in the poll. Candy has a different articulation with the left hind leg from the right one, which showed clearly in the trot extensions. Still she is always pushing and engaged from behind. In the walk she gained much overtrack, but the rhythm was not entirely pure 4-beat, which made the score of 8.8 for walk slightly surprising. The canter strike off was short, but Candy was always working from behind with a hindleg that reached under. Also here, a bit more collection would have suited. Overall the silhouette was nice. Candy got 8.8 for trot and walk, 8.6 for canter, 8.5 for submission and 9.0 for general impression, to finish on 8.74 points.

Bart Veeze and Theo Driessen's KWPN performance test winner Imposantos (by Wynton x Krack C) made a very good impression. Although the black stallion is quite stocky in his body type, he shows off with his shoulder freedom and very well balanced trot extensions. Veeze leans back in the saddle quite a lot and the noseband was tight on this horse, which made the contact with the bit less elastic, but overall it was a very smooth, controlled ride with elegant trot work and a very good, relaxed extended walk. In the canter the horse loses some suppleness in the top line which meddles with the clear 3-beat rhythm, but the strides were scopey. The pair scored 9.0 for trot, 8.8 for walk, 8.5 for canter, 8.3 for submission and 8.9 for general impression to finish on 8.70 points.

Veeze also placed eight on the very sympathetic KWPN mare Imagine (by Dream Boy x Jackson). This chique dark bay mare has much shoulder freedom but there was a lack of bending in the ribcage and neck on the half voltes. The walk was excellent and the canter nicely uphill, even though the horse got a bit abrupt in the transitions. Overall the hindleg could carry a bit more instead of push. Imagine scored 8.9 for trot, 8.8 for walk, 8.6 for canter, 8.0 for submission and 8.8 for general impression to total 8.62 points.

The action continues in Ermelo tomorrow, Friday 3 August 2018, with the 6 and 7-year old preliminary test. The 5-year olds will have their consolation final in the B-arena. The top 12 ranked horses automatically move on to the finals. The top three ranked horses in the consolation finals will also move on to the Finals on Saturday afternoon 4 August 2018.