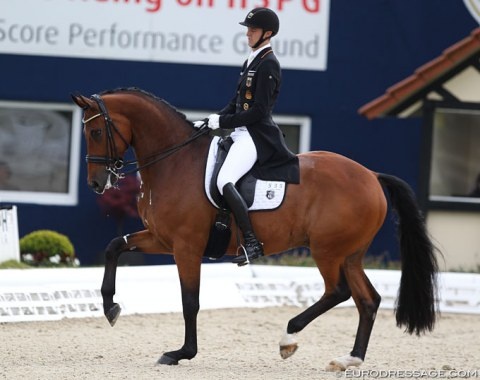 2018 German Dressage Champions Sönke Rothenger and Cosmo will not be competing at the 2018 CDIO Aachen next week. Aachen is the last mandatory team selection trial for German candidates.

Rothenberger's 11-year old Dutch warmblood gelding Cosmo (by Van Gogh x Landjonker) has an infection and the Rothenbergers do not want to take any risk. In agreement with team trainer Monica Theodorescu and the German selection committee it has been decided to withdraw Cosmo from competing in Aachen.

"This morning he had a fever and it turned out to be an infection. We found out because of his temperature," Sönke Rothenberger told Eurodressage exclusively. "We decided to give him time until he's fully recovered."

In principle, Rothenberger's spot on the German team is totally secure, even if he misses Aachen. The pair won the Grand Prix Special at the 2018 CDI Hagen in April with an 82.255% score and beat the world number one, Isabell Werth on Weihegold, at the 2018 German Championships in Balve in May.

"That Cosmo will be 100% fit is most important and then we'll see. I am optimistic. I hope and think so," Sönke said about his security of team selection. "It was a real shock for me (this morning). There is enough time. Now it's up to Monica and the rest to decide."

From a strategic viewpoint, Cosmo's absence in Aachen means that the big battle between the three biggest individual medal candidates - Isabell Werth (Weihegold), Laura Graves (Verdades) and Sönke Rothenberger (Cosmo) -- will not take place in Aachen, before it is repeated for the actual medals in Tryon.